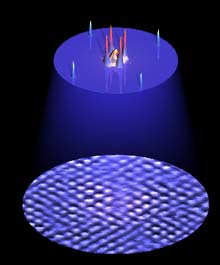 Like the delicate form of an icicle defying gravity during a spring thaw, patterns emerge in nature when forces compete. Scientists at the University of Illinois at Urbana-Champaign have found a hidden pattern in cuprate (copper-containing) superconductors that may help explain high-temperature superconductivity.

Superconductivity, the complete loss of electrical resistance in some materials, occurs at temperatures near absolute zero. First observed in 1911 by Dutch physicist Heike Kamerlingh Onnes, the mechanism of superconductivity remained unexplained until 1957, when Illinois physicists John Bardeen, Leon Cooper, and J. Robert Schrieffer determined that electrons, normally repulsive, could form pairs and move in concert in superconducting materials below a certain critical temperature.

For more than a decade, scientists have been baffled by superconductivity in the copper oxides, which occurs at liquid-nitrogen temperatures and does not seem to behave according to standard BCS theory. A tantalizing goal, which would have enormous implications for electronics and power distribution, is to achieve superconductivity at room temperature. A large piece of the puzzle has been to understand how the coherent dance of electrons that gives rise to superconductivity changes when the material is heated.

In a paper to appear in the journal Science, as part of the Science Express Web site, on Feb. 12, researchers at Illinois show that when heated, the orderly superconducting dance of electrons is replaced, not by randomness as might be assumed, but by a distinct type of movement in which electrons organize into a checkerboard pattern. The experimental findings imply that the two types of electron organization, coherent motion and spatial organization, are in competition in the copper oxides — an idea that may break the logjam on the mystery of high-temperature superconductivity.

“Comparing maps of electron waves in both the superconducting and the pseudogap state, we have found that electrons in the pseudogap state organize into a checkerboard pattern,” Yazdani said. “This pattern appears to be the result of competing forces felt by the electrons, such as Coulomb repulsion because of their charge and magnetic interactions resulting from their spins.”

Regardless of the specific cause of the local ordering, “our experimental observations provide new constraints on the potential theoretical description of the pseudogap state in the cuprates and how it transforms into superconductivity when we cool the cuprate samples,” Yazdani said.

Pattern formation of electron waves in high-temperature copper-oxide superconductors has long been anticipated theoretically, and Illinois physics professor Eduardo Fradkin contributed to the theoretical work. However, the experimental discovery of such pattern formation was made possible by a new generation of STM designed by Yazdani’s group to operate at temperatures above the superconducting transition temperature.

Collaborators on the pattern-formation project also included colleagues at the Central Research Institute of Electric Power Industry in Japan.

The National Science Foundation, Office of Naval Research and the U.S. Department of Energy funded the work.