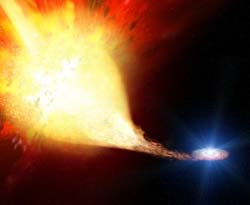 A joint European/University of Hawaii team of astronomers has for the first time observed a stellar ‘survivor’ to emerge from a double star system involving an exploded supernova.

Supernovae are some of the most significant sources of chemical elements in the Universe, and they are at the heart of our understanding of the evolution of galaxies.

Supernovae are some of the most violent events in the Universe. For many years astronomers have thought that they occur in either solitary massive stars (Type II supernovae) or in a binary system where the companion star plays an important role (Type I supernovae). However no one has been able to observe any such companion star. It has even been speculated that the companion stars might not survive the actual explosion…

The second brightest supernova discovered in modern times, SN 1993J, was found in the beautiful spiral galaxy M81 on 28 March 1993. From archival images of this galaxy taken before the explosion, a red supergiant was identified as the mother star in 1993 – only the second time astronomers have actually seen the progenitor of a supernova explosion (the first was SN 1987A, the supernova that exploded in 1987 in our neighbouring galaxy, the Large Magellanic Cloud).

Initially rather ordinary, SN 1993J began to puzzle astronomers as its ejecta seemed too rich in the chemical element helium and instead of fading normally it showed a bizarre sharp increase in brightness. The astronomers realised that a normal red supergiant alone could not have given rise to such a weird supernova. It was suggested that the red supergiant orbited a companion star that had shredded its outer layers just before the explosion.

Ten years after this cataclysmic event, a European/University of Hawaii team of astronomers has now peered deep into the glowing remnants of SN 1993J using the NASA/ESA Hubble Space Telescope’s Advanced Camera for Surveys (ACS) and the giant Keck telescope on Mauna Kea in Hawaii. They have discovered a massive star exactly at the position of the supernova that is the long sought companion to the supernova progenitor.

This is the first supernova companion star ever to be detected and it represents a triumph for the theoretical models. In addition, this observation allows a detailed investigation of the stellar physics leading to supernova explosions. It is now clear that during the last 250 years before the explosion 10 solar masses of gas were torn violently from the red supergiant by its partner. By observing the companion closely in the coming years it may even be possible to detect a neutron star or black hole emerge from the remnants of the explosion ‘in real time’.

Given the paucity of observations of supernova progenitor systems this result, published in Nature on 8 January 2004, is likely to ’be crucial to understanding how very massive stars explode and why we see such peculiar supernovae’ according to first author Justyn R. Maund from the University of Cambridge, UK.

Stephen Smartt, also from the University of Cambridge, says, “Supernova explosions are at the heart of our understanding of the evolution of galaxies and the formation of chemical elements in the Universe. It is essential that we know what type of stars produce them.”

For the last ten years astronomers have believed that they could understand the very peculiar behaviour of 1993J by invoking the existence of a binary companion star and now this picture has proved correct.

According to Rolf Kudritzki, from the University of Hawaii, “The combination of the outstanding spatial resolution of Hubble and the huge light gathering power of the Keck 10- metre telescope in Hawaii has made this fantastic discovery possible.”

Supernovae occur when a star of more than about eight times the mass of the Sun reaches the end of its nuclear fuel reserves and can no longer produce enough energy to keep the star from collapsing under its own immense weight. The core of the star collapses, and the outer layers are ejected in a fast-moving shock wave.

This huge energy release causes the visible supernova we see. While astronomers are convinced that observations will match this theoretical model, they are in the embarrassing position that they have confidently identified only two stars that later exploded as supernovae – the precursors of supernovae 1987A and 1993J.

There have been more than 2000 supernovae discovered in galaxies beyond the Milky Way and there appear to be about eight distinct sub-classes. However identifying which stars produce which flavours has proved incredibly difficult. This team has now embarked on a parallel project with the Hubble Space Telescope to image a large number of galaxies and then wait patiently for a supernova to explode.

Supernovae appear in spiral galaxies like M81 on average once every 100 years or so. The team, led by Stephen Smartt, hope to increase the numbers of supernova progenitors known from 2 to 20 over the next five years.