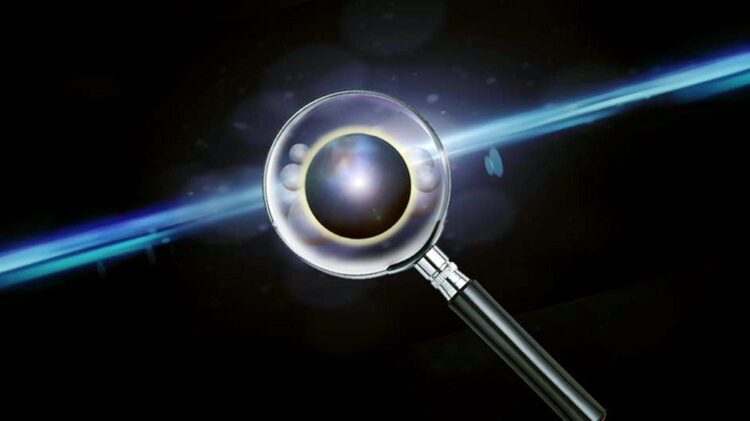 Like a magnifying glass zooming in on an object, a time lens can zoom in on time. In recent work, engineers at Columbia built a time lens to identify individual photons.
Credit: Nicoletta Barolini

Light has long been used to transmit information in many of our everyday electronic devices. Because light is made of quantum particles called photons, it will also play an important role in information processing in the coming generation of quantum devices. But first, researchers need to gain control of individual photons. Writing in Optica, Columbia Engineers propose using a time lens.

“Just like an ordinary magnifying glass can zoom in on some spatial phenomena you wouldn’t otherwise be able to see, a time lens lets you resolve details on a temporal scale,” said Chaitali Joshi, the first author of the work and former PhD student in Alexander Gaeta’s lab. A laser is a focused beam of many, many, many photons oscillating through space at a particular frequency; the team’s time lens lets them pick out individual particles of light faster than ever before.

The experimental set-up consists of two laser beams that “mix” with a signal photon to create another packet of light at a different frequency. With their time lens, Joshi and her colleagues were able to identify single photons from a larger beam with picosecond resolution. That’s 10-12 of a second and about 70x faster than has been observed with other single-photon detectors said Joshi, now a postdoc at CalTech. Such a time lens allows for temporally resolving individual photons with a precision that can’t be achieved with current photon detectors.

In addition to seeing single photons, the team can also manipulate their spectra (i.e., their composite colors), reshaping the path along which they traveled. This is an important step for building quantum information networks. “In such a network, all the nodes need to be able to talk to each other. When those nodes are photons, you need their spectral and temporal bandwidths to match, which we can achieve with a time lens,” said Joshi.

With future tweaks, the Gaeta lab hopes to further reduce the time resolution by more than a factor of three and will continue exploring how they can control individual photons. “With our time lens, the bandwidth is tunable to whatever application you have in mind: you just need to adjust the magnification,” said Joshi. Potential applications include information processing, quantum key distribution, quantum sensing, and more.

For now, the work is done with optical fibers, though the lab hopes to one day incorporate time lenses into integrated photonic chips, like electronic chips, and scale the system to many devices on a chip to allow for processing many photons simultaneously.

B.M.S. acknowledges support from the Fulbright Future Scholarship (funded by the Kinghorn Foundation). Certain commercial equipment and instruments are identified in this paper for completeness. Such identification does not imply recommendation or endorsement by the National Institute of Standards and Technology, nor does it imply that the materials or equipment identified are necessarily the best available for the purpose.