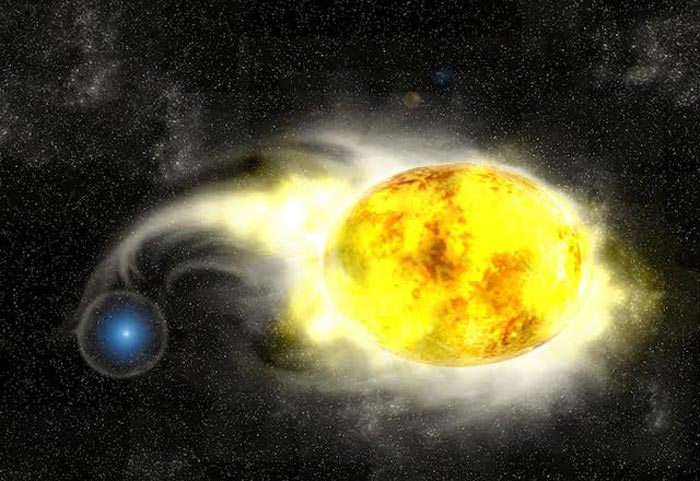 Artist's impression of a yellow supergiant in a close binary with a blue, main sequence companion star, similar to the properties derived for the 2019yvr progenitor system in Kilpatrick et al. (2021). If the progenitor system to 2019yvr was in such a binary, it must have had a very close interaction that stripped a large amount of hydrogen from the yellow supergiant in the last 100 years before it exploded as a supernova.
Credit: Kavli IPMU / Aya Tsuboi

A curiously yellow pre-supernova star has caused astrophysicists to re-evaluate what’s possible at the deaths of our Universe’s most massive stars. The team describe the peculiar star and its resulting supernova in a new study published today in Monthly Notices of the Royal Astronomical Society.

At the end of their lives, cool, yellow stars are typically shrouded in hydrogen, which conceals the star’s hot, blue interior. But this yellow star, located 35 million light years from Earth in the Virgo galaxy cluster, was mysteriously lacking this crucial hydrogen layer at the time of its explosion.

“We haven’t seen this scenario before,” said Charles Kilpatrick, postdoctoral fellow at Northwestern University’s Center for Interdisciplinary Exploration and Research in Astrophysics (CIERA), who led the study. “If a star explodes without hydrogen, it should be extremely blue — really, really hot. It’s almost impossible for a star to be this cool without having hydrogen in its outer layer. We looked at every single stellar model that could explain a star like this, and every single model requires that the star had hydrogen, which, from its supernova, we know it did not. It stretches what’s physically possible.”

Kilpatrick is also a member of the Young Supernova Experiment, which uses the Pan-STARRS telescope at Haleakalā, Hawaii to catch supernovae right after they explode. After the Young Supernova Experiment spotted supernova 2019yvr in the relatively nearby spiral galaxy NGC 4666, the team used deep space images captured by NASA’s Hubble Space Telescope, which fortunately already observed this section of the sky two and a half years before the star exploded.

“What massive stars do right before they explode is a big unsolved mystery,” Kilpatrick said. “It’s rare to see this kind of star right before it explodes into a supernova.”

The Hubble images show the source of the supernova, a massive star imaged just a couple of years before the explosion. Several months after the explosion however, Kilpatrick and his team discovered that the material ejected in the star’s final explosion seemed to collide with a large mass of hydrogen. This led the team to hypothesize that the progenitor star might have expelled the hydrogen within a few years before its death.

“Astronomers have suspected that stars undergo violent eruptions or death throes in the years before we see supernovae,” Kilpatrick said. “This star’s discovery provides some of the most direct evidence ever found that stars experience catastrophic eruptions, which cause them to lose mass before an explosion. If the star was having these eruptions, then it likely expelled its hydrogen several decades before it exploded.”

“Unlike its normal behaviour right after it exploded, the hydrogen interaction revealed it’s kind of this oddball supernova,” Kilpatrick said. “But it’s exceptional that we were able to find its progenitor star in Hubble data. In four or five years, I think we will be able to learn more about what happened.”