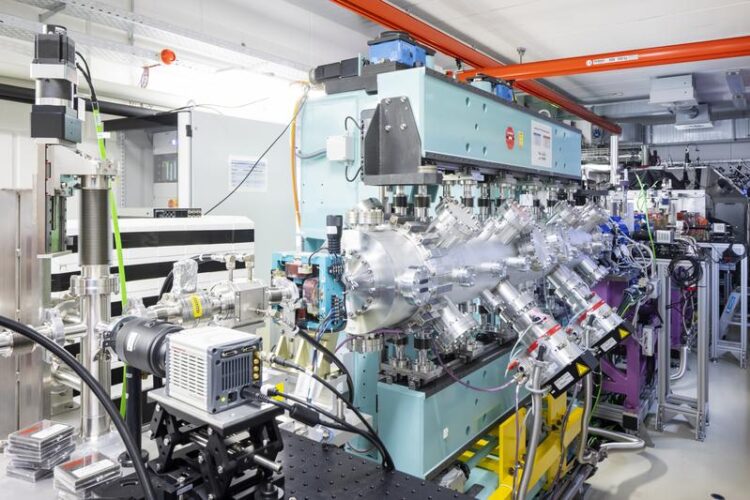 Extremely intense light pulses generated by free-electron lasers (FELs) are versatile tools in research. Particularly in the X-ray range, they can be deployed to analyze the details of atomic structures of a wide variety of materials. Until now, FELs such as the European XFEL in Germany are based on conventional electron accelerators, which make them long and expensive. An international team led by Synchrotron SOLEIL, France, and Helmholtz-Zentrum Dresden-Rossendorf (HZDR), has now achieved a breakthrough on the way to an affordable alternative solution: they were able to demonstrate seeded FEL lasing in the ultraviolet regime based on a still young technology – laser-plasma acceleration.

X-ray free-electron lasers are among the most powerful and yet also most complex research machines in the world. The principle: with the help of strong radio-frequency waves, an accelerator brings electrons close to the speed of light. Then the particles, bundled into bunches, fly through the “undulator” – a magnet arrangement with periodically alternating fields that forces the electron bunches onto slalom paths. This causes the bunches to reorganize into many smaller groups of electrons – micro-bunches, which together emit extremely powerful, laser-like light pulses. These can then be used to decipher previously unknown properties of materials or to track extremely fast processes, such as chemical reactions that take place in quadrillionths of a second.

However, the billion-dollar European XFEL and other similar infrastructures, have a drawback: “They are several hundred meters or even a few kilometers long,” said Prof. Ulrich Schramm, director of the HZDR Institute of Radiation Physics. “That’s why we’re working on an alternative technology to make such facilities smaller and more cost-effective, and then they could be closer to users at universities and industry in the future.” The basis is a new accelerator technology still under development – laser-plasma acceleration. “Using a high-power laser we fire short, ultra-strong light flashes into a plasma, which is an ionized gas of negatively charged electrons and positively charged ions,” explained HZDR physicist Dr. Arie Irman. “In the plasma, the light pulse then generates a strong wave of alternating electric fields, similar to the wake of a ship.” This wave can rapidly accelerate electrons to higher speed over a very short distance. In principle, this could shrink an accelerator that is now a hundred meters long to a length of much less than one meter.

In principle, electrons have long been accelerated using this technique. But only recently, though still in an early stage, it has been possible to send such fast particle bunches from a plasma accelerator through an undulator and then convert them into laser-light flashes. In order to generate a well-controllable FEL laser light driven by plasma acceleration for the first time, the HZDR teamed up with experts from the French synchrotron SOLEIL. “A plasma accelerator installed in Dresden, driven by the high-power laser DRACO, delivered fast electron bunches of high beam quality,” SOLEIL physicist Dr. Marie-Emmanuelle Couprie described. “Behind it, we then built an undulator along with the associated accelerator beamline, which had previously been optimized for electron beam-transport methods, generation of undulator radiation, seed generation and shaping including overlap issue and methodologies over several years in the French plasma accelerator laboratory Laboratoire d’Optique Appliquée in Palaiseau jointly with PhLAM in Lille.”

To generate FEL laser flashes in the ultraviolet (UV) regime, the researchers had to solve several essential problems. “We had to produce particle bunches that contain copious amounts of electrons,” Irman explained. “At the same time, it was important that these electrons possess as equal energies as possible.” In order to prevent the electron bunches from diverging too quickly, a refined trick was used: the so-called plasma lens. In addition, the team deployed a method called “seeding”: synchronously to the electron bunches, they shot external laser-light pulses into the undulator, which is crucial to accelerate the FEL process and allowed for an improved beam quality of the FEL laser flashes.

With this setup, the team was finally able to achieve its goal: as hoped, demonstration of the plasma-driven FEL generated ultrashort UV laser flashes. “For 15 years, people in the advanced accelerator physics community have been dreaming about realizing a free-electron laser like this,” Ulrich Schramm enthused. “You can imagine how happy we are that we have now achieved this in Dresden.” For Arie Irman, too, a dream came true: “A plasma-driven free-electron laser was always considered one of the most important milestones in our field. Through our experiment, we have now achieved tremendous progress.”

Before a plasma-based FEL can be put to practical use, there are still various challenges to overcome. For example, while the setup in Dresden was able to generate UV pulses, research requires high-intensity X-ray flashes – for which the electrons would have to be accelerated to much higher energies. “This is already demonstrated in principle with plasma acceleration, but so far the quality of the electron bunches is still too poor and too unstable for an X-ray FEL,” Schramm said. “But with a new generation of high-power lasers, we hope to solve this problem.” If the endeavor succeeds, free-electron lasers could fit into the institute’s basement in the future – and could thus be available to significantly more research teams than today.