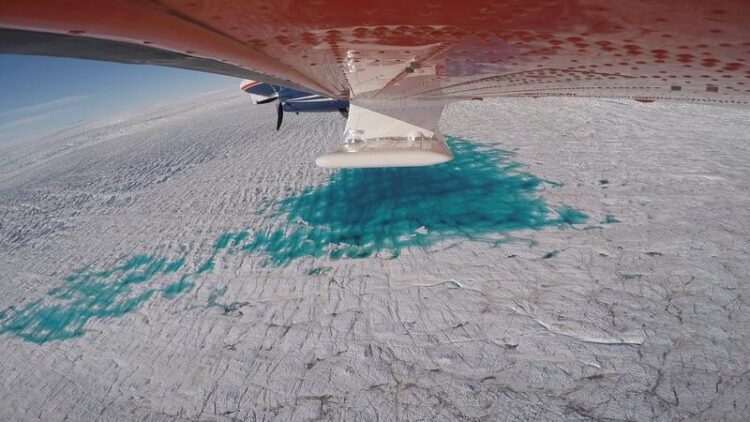 Radar scans of the Greenland ice sheet reveal the shutdown and reconfiguration of ice streams in the span of a few thousand years.

Major ice streams can shut down, shifting rapid ice transport to other parts of the ice sheet, within a few thousand years. This was determined in reconstructions of two ice streams, based on ice-penetrating radar scans of the Greenland ice sheet, that a team of researchers led by the Alfred Wegener Institute have just presented in the journal Nature Geoscience.

How quickly the sea level rises in the future will to a great extent depend on how dynamic or stable the Greenland ice sheet is – ice that has, through its mass loss, contributed ca. 40 mm to sea-level rise since 1900. In addition to melting on its surface and base, the sheet loses mass through ice streams – essentially conveyor belts for rapid ice transport from the inner sheet to its edge. The routes of past ice streams can now be accurately reconstructed in the now glacier-free areas at the sheet’s edge, as the landforms they leave behind offer clearly visible clues. However, until recently, very little was known about the activity of past ice streams in the inland Greenland ice sheet, since the area is difficult to access.

The answer: cutting-edge measuring technologies like high-resolution radar systems (https://www.awi.de/en/focus/ice-sheets.html) that can penetrate the ice to map structures that lie several thousand metres below the surface of the ice sheet. As part of a project to reconstruct past ice streams in cooperation with Professor Paul Bons from the University of Tübingen, experts from the Alfred Wegener Institute, Helmholtz Centre for Polar and Marine Research (AWI) used methods from structural geology to analyse these images.

“Thanks to our ice-penetrating radar data, we can show how quickly the Greenland ice sheet’s ice transport system reconfigured itself. Major ice streams can ‘shut down’ within a few thousand or even several hundred years, while others appear elsewhere at a similar speed. Until now, no-one had any idea that the streams of this scale could change so quickly,” reports AWI glaciologist Dr Steven Franke, first author of the study. Ice transport involving the flow of solid ice – not melting – is a component of ice dynamics that must be more actively integrated into forecasts of how much the Greenland ice sheet will contribute to sea-level rise in a variety of future climate scenarios. Current ice-sheet models can only reflect those processes that are clearly understood. Yet since observations on ice-stream instability have been lacking, this aspect is not included in any model. The ice’s flow history, now made visible by radar, offers insights into the temporal and spatial evolution of this dynamic.

The data released in the study was gathered on aerial campaigns with the AWI research aeroplane Polar 6, and from NASA’s Operation IceBridge in central Northeast Greenland, where only very low flow speeds can currently be observed in the ice. The team of researchers identified two paleo ice streams, which were once active and now lie buried under several hundred metres of ice. Their analyses show that these ice streams were active into the Holocene (less than 11,700 years ago) and extended far into the inland ice of central Northeast Greenland.

“The radar signature of one of the two paleo ice streams, which we used to reconstruct past ice-stream activity, is remarkably similar to that of the massive and still active North East Greenland Ice Stream (NEGIS),” says AWI glaciologist Dr Daniela Jansen, head of the project on past ice streams that produced the publication. This discovery, she claims, could offer new insights into the future behaviour of the NEGIS, the formation and stability of which are the subject of considerable debate. The observations now released will allow the researchers to grasp in more detail the mechanisms responsible for producing and shaping ice streams. As a result, they can be more accurately represented in models designed to predict how our planet’s ice sheets will react to global warming.

Printable images will be available in the online version of this press release: https://www.awi.de/en/about-us/service/press.html