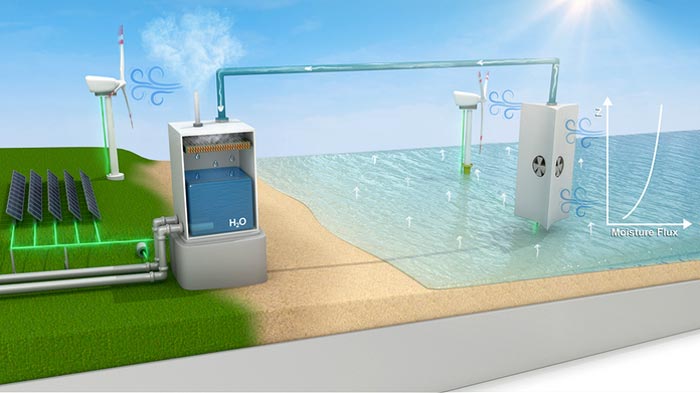 “Eventually, we will need to find a way to increase the supply of fresh water as conservation and recycled water from existing sources, albeit essential, will not be sufficient to meet human needs. We think our newly proposed method can do that at large scales,” said Illinois professor Praveen Kumar. The illustration shows Kumar and his co-authors’ proposed approach for capturing moisture above ocean surfaces and transporting it to land for condensation.
Graphic courtesy Praveen Kumar and Scientific Reports

An almost limitless supply of fresh water exists in the form of water vapor above Earth’s oceans, yet remains untapped, researchers said. A new study from the University of Illinois Urbana-Champaign is the first to suggest an investment in new infrastructure capable of harvesting oceanic water vapor as a solution to limited supplies of fresh water in various locations around the world.

The study, led by civil and environmental engineering professor and Prairie Research Institute executive director Praveen Kumar, evaluated 14 water-stressed locations across the globe for the feasibility of a hypothetical structure capable of capturing water vapor from above the ocean and condensing it into fresh water – and do so in a manner that will remain feasible in the face of continued climate change.

“Water scarcity is a global problem and hits close to home here in the U.S. regarding the sinking water levels in the Colorado River basin, which affects the whole Western U.S.,” Kumar said. “However, in subtropical regions, like the Western U.S., nearby oceans are continuously evaporating water because there is enough solar radiation due to the very little cloud coverage throughout the year.”

Previous wastewater recycling, cloud seeding and desalination techniques have met only limited success, the researchers said. Though deployed in some areas across the globe, desalination plants face sustainability issues because of the brine and heavy metal-laden wastewater produced – so much so that California has recently rejected measures to add new desalination plants.

“Eventually, we will need to find a way to increase the supply of fresh water as conservation and recycled water from existing sources, albeit essential, will not be sufficient to meet human needs. We think our newly proposed method can do that at large scales,” Kumar said.

The researchers performed atmospheric and economic analyses of the placement of hypothetical offshore structures 210 meters in width and 100 meters in height.

Through their analyses, the researchers concluded that capturing moisture over ocean surfaces is feasible for many water-stressed regions worldwide. The estimated water yield of the proposed structures could provide fresh water for large population centers in the subtropics.

One of the more robust projections of climate change is that dry regions will get drier, and wet areas will get wetter. “The current regions experiencing water scarcity will likely be even drier in the future, exacerbating the problem,” Dominguez said. “And unfortunately, people continue moving to water-limited areas, like the Southwestern U.S.”

However, this projection of increasingly arid conditions favors the new ocean vapor-harvesting technology.

“The climate projections show that the oceanic vapor flux will only increase over time, providing even more fresh water supply,” Rahman said. “So, the idea we are proposing will be feasible under climate change. This provides a much needed and effective approach for adaptation to climate change, particularly to vulnerable populations living in arid and semi-arid regions of the world.”

The researchers said one of the more elegant features of this proposed solution is that it works like the natural water cycle.

“The difference is that we can guide where the evaporated water from the ocean goes,” Dominguez said. “When Praveen approached me with this idea, we both wondered why nobody had thought about it before because it seemed like such an obvious solution. But it hasn’t been done before, and I think it is because researchers are so focused on land-based solutions – but our study shows other options do, in fact, exist.”

The researchers said this study opens the door for novel infrastructure investments that can effectively address the increasing global scarcity of fresh water.

The University of Illinois Urbana-Champaign, the Lovell Professorship in the department of civil and environmental engineering, The University Scholar Program and the National Science Foundation supported this research.