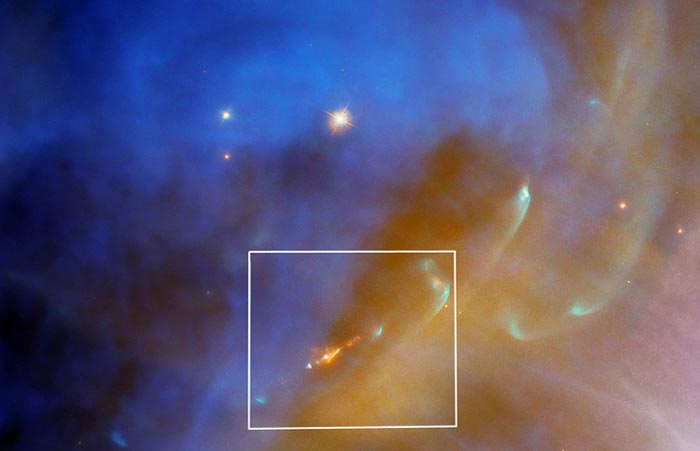 Hubble captured a bright jet from a newly forming star in this image of the Running Man Nebula (NGC 1977). Slide to the right to see the full image. Slide to the left to see a closer view of the jet.
Credits: NASA, ESA, J. Bally (University of Colorado at Boulder), and DSS; Processing: Gladys Kober (NASA/Catholic University of America)

A jet from a newly formed star flares into the shining depths of reflection nebula NGC 1977 in this Hubble image. The jet (the orange object at the bottom center of the image) is being emitted by the young star Parengo 2042, which is embedded in a disk of debris that could give rise to planets. The star powers a pulsing jet of plasma that stretches over two light-years through space, bending to the north in this image.

The gas of the jet has been ionized until it glows by the radiation of a nearby star, 42 Orionis. This makes it particularly useful to researchers because its outflow remains visible under the ionizing radiation of nearby stars. Typically the outflow of jets like this would only be visible as it collided with surrounding material, creating bright shock waves that vanish as they cool.

In this image, red and orange colors indicate the jet and glowing gas of related shocks. The glowing blue ripples that seem to be flowing away from the jet to the right of the image are bow shocks facing the star 42 Orionis (not shown). Bow shocks happen in space when streams of gas collide, and are named after the crescent-shaped waves made by a ship as it moves through water.

The bright western lobe of the jet is cocooned in a series of orange arcs that diminish in size with increasing distance from the star, forming a cone or spindle shape. These arcs may trace the ionized outer rim of a disk of debris around the star with a radius of 500 times the distance between the Sun and Earth and a sizable (170 astronomical units) hole in the center of the disk.

The spindle-like shape may trace the surface of an outflow of material away from the disk and is estimated to be losing the mass of approximately a hundred-million Suns every year.

NGC 1977 is part of a trio of reflection nebulae that make up the Running Man Nebula in the constellation Orion.