Hope rising for understanding and protecting against black rot disease 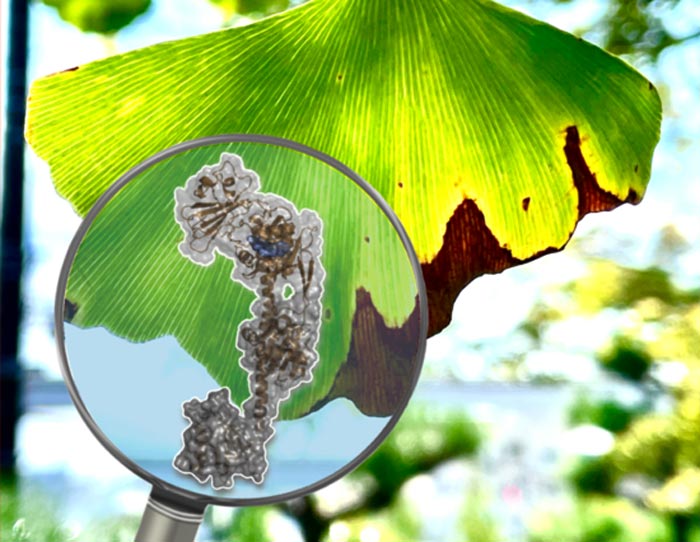 Atomic structural details of a phytochrome protein, taken from the bacterium Xanthomonas campestris, which is responsible for the photosensitivity, signal propagation and pathogenicity. The research team has resolved these details down to atomic scale resolution and has created models that allow a better understanding of black rot disease in crops.
Credit: Leo Chavas, Nagoya University

The mechanisms governing the light-sensitive activities of phytochrome, a bacterial protein, have been clarified at atomic scale resolution, opening the door to understanding black rot disease, as well as to regulating other bacterial pathogenicities.

Black rot disease in cabbages, radishes and related cruciferous crops may have disastrous consequences for the yield and production of marketable plants. The bacterium Xanthomonas campestris is the major cause of black rot disease, which works by retarding several light-mediated biological processes. Behind this biological retardation lies a complicated signaling cascade that is balanced by specialized proteins such as phytochromes.

Phytochromes are important for mediating plant growth and development by acting like light switches: they monitor the light falling on the plant and trigger reactions such as shade avoidance. Their structure is organized in modules that interact with each other and change shape when they absorb two specific wavelengths of light (so-called “red” and “far red”). This is a key element in a plant’s response to light. Since their discovery, phytochromes have also been isolated in cyanobacteria, nonoxygenic bacteria and fungi.

Scientists have spent decades trying to understand the ability of Xanthomonas to cause disease, in the hope of unraveling the mechanistic details of the bacterium’s infection processes and life cycle, and to identify a means of treating black rot disease. One of the main directions of current research is to understand the structure of the biological actors, including phytochromes, that are responsible for these processes. However, phytochromes are a challenging target because they have a modular structure, and when they sense light their modules become flexible and the protein changes shape while it is being observed.

A research team led by Professor Hernán Bonomi from the Fundación Instituto Leloir, Argentina, has shed light on how long-range signals sensed by phytochromes are created and propagated. The work was published in the journal Science Advances on November 26, 2021. The team is a large international collaboration that includes researchers from Argentina, France, and Japan. Professor Leonard Chavas from Nagoya University provided expertise in synchrotron radiation and structural analysis.

Several research groups worldwide have shown interest in understanding phytochromes at the molecular level and have resolved a large number of phytochrome structures from a variety of organisms. However, despite the vast amount of structural information reported in the literature, the protein’s flexible structure is difficult to pinpoint. The most important unanswered question is how long-range structural changes observed within phytochromes are propagated from their light-sensing module to its “effector module” during photoconversion. When it receives the signal, the effector module takes on the ideal shape for initiating a cascade of reactions that regulate the bacterium’s response to the light. This question was elusive mainly because the known phytochrome structures are truncated – no full-length phytochrome structure has been reported so far at atomic scale resolution in both activated and non-activated photostates.

In their paper, the research team presents a complete characterization of the phytochrome light sensor in the Xanthomonas bacterium, in both of its key photosensitive states (activated and unactivated). Also, the light-induced shape changes of the modules making up the protein are described down to atomic scale resolution, highlighting remarkable structural rearrangements at the secondary, tertiary, and quaternary levels for the first time in this photoreceptor family. By combining these results with biochemical and computational studies, a new photoactivation model was proposed that explains the signaling mechanism, from the changes in chemical structure of the chromophore (the region within the protein that is able to receive red (and “far red”) light and initiate a shape-changing signal) down to the remodeling of not only the interactions among the modules but also the way the protein is assembled.

The research results have implications in photobiology, as well as for the understanding of mechanisms of bacteria pathogenicity in plants and, in particular, black rot disease.

The paper, “Structural basis for the Pr-Pfr long-range signaling mechanism of a full-length bacterial phytochrome at the atomic level”, was published in the journal Science Advances, November 26, 2021.