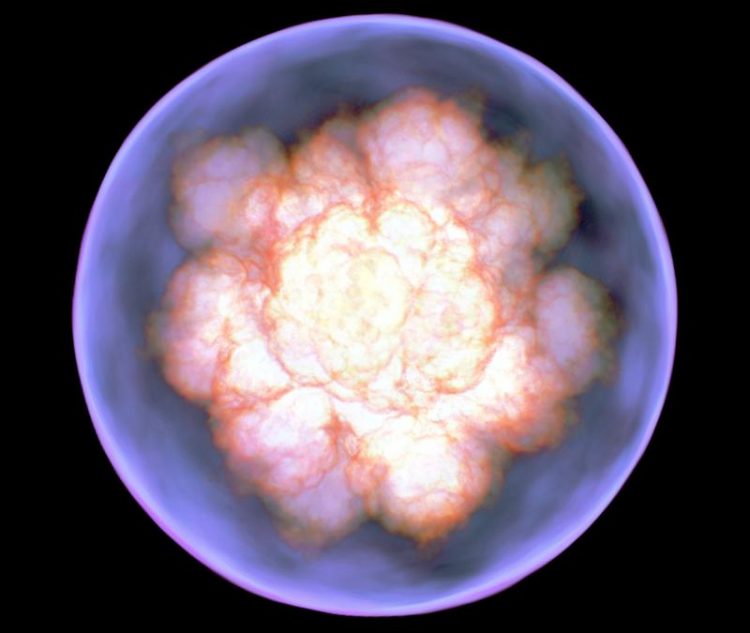 Modern astronomy began with a supernova. In November 1572, Danish astronomer Tycho Brahe discovered a new star – and destroyed the idea of a sky of fixed stars. Today, we know that Brahe was observing the death of a star, which ended in a massive explosion. Friedrich Röpke aims to find out how these supernova explosions proceed.

The astrophysicist is now leader of the new research group „Physics of Stellar Objects“ (PSO) at Heidelberg Institute for Theoretical Studies (HITS). As of March 1, 2015, he has been appointed professor for Theoretical Astrophysics at Heidelberg University. His workplace is HITS. This joint appointment is a perfect proof for the close cooperation between the two institutes. With Friedrich Röpke and Volker Springel, there now are two HITS astrophysicists who are also professors at Heidelberg University.

“The new group is another important component of our concept, “ says Klaus Tschira who founded the HITS in 2010 as a non-profit research institute. “Research on stellar astrophysics, like Friedrich Röpke does, is a perfect complement of the work of Volker Springel’s group on large-scale processes like galaxy formation.“

Three years later, he got appointed professor for Astrophysics at the University of Würzburg. In 2010, the researcher was awarded the „ARCHES Award“ by the German Federal Ministry for Education and Research together with Prof. Avishay Gal-Yam from the Weizmann Institute, Rehovot/Israel. The award honors young scientists whose work shows great potential to have noticeable impact on their respective fields of research.

Friedrich Röpke studies Type Ia supernovae. Observation of these cosmic explosions allows astronomers to determine distances in space. In 2011, the Nobel Prize in Physics was awarded to researchers who proved the accelerated expansion of the Universe with supernovae. The PSO group collaborates closely with one of the laureates from 2011, Brian Schmidt (Australian National University, Canberra) in a program supported by the German Academic Exchange Service DAAD.

Friedrich Röpke’s research aims to understand exactly what happens when stars die. Together with other scientists, he used computer simulations to show that some highly-luminous supernovae are the result of two compact stars, so-called “white dwarfs”, merging together. He also investigates alternatives by modeling the explosion of a white dwarf when it reaches its maximum stable mass (the so-called Chandrasekhar limit), using highly complex simulations on supercomputers. White dwarfs are only about the size of the Earth and are extremely dense. When they explode as supernova, they shine brighter than the whole galaxy. „Our detailed simulations helped us to predict data that closely reproduce actual telescope observations of Type Ia supernovae, “ explains the astrophysicist.

“Modelling of supernova explosions is, however, just one part of our research at HITS,” says Friedrich Röpke. “We also strive for a better understanding of how stars evolve and how the elements that make up our world are formed within them.” Classical astrophysics follows stellar evolution based on very simplifying assumptions. „To improve the predictive power of the models, we have to describe the physical processes taking place within stars in a dynamic way,“ says the astrophysicist. He and his group have developed a new computer code that – combined with the rapidly increasing capacities of supercomputers – opens new perspectives for the modelling of stars.

In contrast to what we are used to from our solar system, most stars in the Universe exist as part of multiple star systems. The interaction between those stars greatly affects their evolution but the involved physical processes are poorly understood until today. The two astrophysics groups at HITS are cooperating on new computer simulations to bring some light into the darkness.