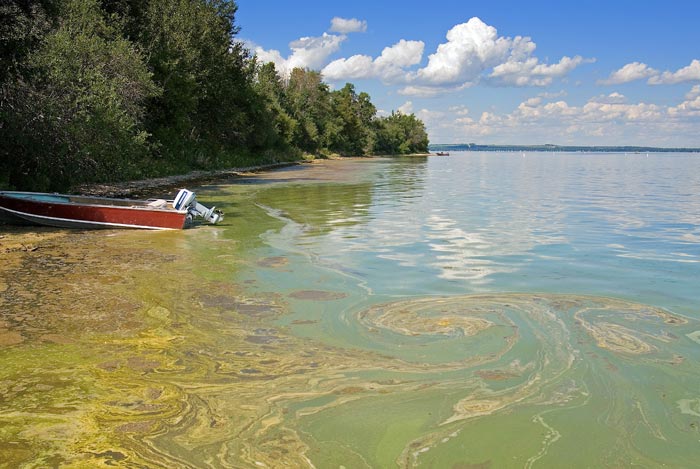 Photo courtesy of Dr. Ron Zurawell, Ph.D., P.Biol. Limnologist/Water Quality Specialist, Alberta Environment Cyanobacteria, the organisms commonly known as blue-green algae, have proliferated much more rapidly than other algae in lakes across North America and Europe over the past two centuries, according to an international team of researchers led by scientists at McGill University.

Their study, published today in the journal Ecology Letters, represents the first continental-scale examination of historical changes in levels of cyanobacteria, the scientific term for the photosynthetic bacteria that form blue-green scum on the surface of ponds and lakes during hot summer months. Cyanobacteria blooms pose a serious threat to drinking-water sources, because certain species contain toxins harmful to the liver or nervous system.

“We found that cyanobacterial populations have expanded really strongly in many lakes since the advent of industrial fertilizers and rapid urban growth,” says Zofia Taranu, who led the study as a PhD candidate in McGill’s Department of Biology. “While we already knew that cyanobacteria prefer warm and nutrient-rich conditions, our study is also the first to show that the effect of nutrients, such as phosphorus and nitrogen, overwhelm those of global warming.”

Researchers from France, Italy, Spain, the UK, Malaysia, and across Canada contributed to the study. While the increase in cyanobacteria in agriculturally developed watersheds was in line with their expectations, the scientists were surprised to find that cyanobacteria also increased in many remote, alpine lakes. In those sites, warmer temperatures and nutrient loading from atmospheric sources are likely to have played a bigger role than direct agricultural runoff.

Dense algal blooms have become a summertime staple of media coverage – and a growing concern of lakefront homeowners — in certain regions, but until now there had been little in the way of long-term, large-scale synthesis of data on the phenomenon. This left room for doubt as to whether harmful algal blooms were truly on the rise, or whether communities were simply better equipped to identify and report blooms when they occur.

The rapid increase in cyanobacteria identified in the study points to the potential for a parallel increase in the concentration of harmful cyanotoxins, says Taranu, who is now a postdoctoral fellow at Université de Montréal. While potentially toxic species don’t synthesize toxins at all times, studies have shown that one of the best predictors of toxin concentrations in lakes is the total abundance of cyanobacteria.

Cyanobacteria can produce toxins that cause damage to the liver or nervous system. The most common symptoms of acute exposure to harmful algal blooms are skin rash or irritation, gastroenteritis and respiratory distress. Chronic, low dose exposures over a lifetime may also result in liver tumors or endocrine disruption. Preliminary studies also suggest that a recently isolated cyanotoxin may become more concentrated across food chains and may be associated with the formation of progressive neurodegenerative diseases such as Alzheimer’s, Parkinson’s and ALS diseases. Although this latter work is still controversial among scientists, “our results underline the importance of further research in this area,” Taranu says.

“Our work shows that we need to work harder as a society to reduce nutrient discharges to surface waters,” says Irene Gregory-Eaves, an associate professor of biology at McGill and co-author of the study. “Because diffuse nutrient loading (as opposed to end-of-pipe effluent) is the main issue, we need to build collaborations to tackle this complex problem. For example, partnerships among freshwater scientists and farmers are starting to happen, and more of this needs to take place, so that we can strike a balance between maximizing crop yields and minimizing excess fertilizer application.”

The research was funded in part by the Natural Sciences and Engineering Research Council of Canada, the Fonds de Recherche du Québec – Nature et technologies, and the Canada Foundation for Innovation.