The Anatomy of an Asteroid 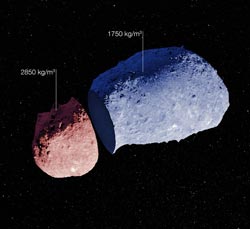 A schematic view of the strange peanut-shaped asteroid Itokawa.<br><br>By making exquisitely precise timing measurements using ESO’s New Technology Telescope, and combining them with a model of the asteroid's surface topography, a team of astronomers has found that different parts of this asteroid have different densities. As well as revealing secrets about the asteroid’s formation, finding out what lies below the surface of asteroids may also shed light on what happens when bodies collide in the Solar System, and provide clues about how planets form. The shape model used for this view is based on the images collected by JAXA's Hayabusa spacecraft.<br><br>Credit:<br>ESO. Acknowledgement: JAXA<br>

By making exquisitely precise measurements astronomers have found that different parts of the asteroid Itokawa have different densities. As well as revealing secrets about the asteroid’s formation, finding out what lies below the surface of asteroids may also shed light on what happens when bodies collide in the Solar System, and provide clues about how planets form.

Using very precise ground-based observations, Stephen Lowry (University of Kent, UK) and colleagues have measured the speed at which the near-Earth asteroid (25143) Itokawa spins and how that spin rate is changing over time. They have combined these delicate observations with new theoretical work on how asteroids radiate heat.

This small asteroid is an intriguing subject as it has a strange peanut shape, as revealed by the Japanese spacecraft Hayabusa in 2005. To probe its internal structure, Lowry’s team used images gathered from 2001 to 2013, by ESO’s New Technology Telescope (NTT) at the La Silla Observatory in Chile among others [1], to measure its brightness variation as it rotates.

This timing data was then used to deduce the asteroid’s spin period very accurately and determine how it is changing over time. When combined with knowledge of the asteroid’s shape this allowed them to explore its interior — revealing the complexity within its core for the first time [2].

“This is the first time we have ever been able to to determine what it is like inside an asteroid,” explains Lowry. “We can see that Itokawa has a highly varied structure — this finding is a significant step forward in our understanding of rocky bodies in the Solar System.”

The spin of an asteroid and other small bodies in space can be affected by sunlight. This phenomenon, known as the Yarkovsky-O’Keefe-Radzievskii-Paddack (YORP) effect, occurs when absorbed light from the Sun is re-emitted from the surface of the object in the form of heat. When the shape of the asteroid is very irregular the heat is not radiated evenly and this creates a tiny, but continuous, torque on the body and changes its spin rate [3], [4].

Lowry’s team measured that the YORP effect was slowly accelerating the rate at which Itokawa spins. The change in rotation period is tiny — a mere 0.045 seconds per year. But this was very different from what was expected and can only be explained if the two parts of the asteroid’s peanut shape have different densities.

This is the first time that astronomers have found evidence for the highly varied internal structure of asteroids. Up until now, the properties of asteroid interiors could only be inferred using rough overall density measurements. This rare glimpse into the diverse innards of Itokawa has led to much speculation regarding its formation. One possibility is that it formed from the two components of a double asteroid after they bumped together and merged.

Lowry added, “Finding that asteroids don’t have homogeneous interiors has far-reaching implications, particularly for models of binary asteroid formation. It could also help with work on reducing the danger of asteroid collisions with Earth, or with plans for future trips to these rocky bodies.”

This new ability to probe the interior of an asteroid is a significant step forward, and may help to unlock many secrets of these mysterious objects.

[2] The density of the interior was found to vary from 1.75 to 2.85 grammes per cubic centimetre. The two densities refer to Itokawa’s two distinct parts.

[3] As a simple and rough analogy for the YORP effect, if one were to shine an intense enough light beam on a propeller it would slowly start spinning due to a similar effect.

[4] Lowry and colleagues were the first to observe the effect in action on a small asteroid known as 2000 PH5 (now known as 54509 YORP, see eso0711). ESO facilities also played a crucial role in this earlier study.

This research was presented in a paper “The Internal Structure of Asteroid (25143) Itokawa as Revealed by Detection of YORP Spin-up”, by Lowry et al., to appear in the journal Astronomy & Astrophysics.

ESO is the foremost intergovernmental astronomy organisation in Europe and the world’s most productive ground-based astronomical observatory by far. It is supported by 15 countries: Austria, Belgium, Brazil, the Czech Republic, Denmark, France, Finland, Germany, Italy, the Netherlands, Portugal, Spain, Sweden, Switzerland and the United Kingdom. ESO carries out an ambitious programme focused on the design, construction and operation of powerful ground-based observing facilities enabling astronomers to make important scientific discoveries.

ESO also plays a leading role in promoting and organising cooperation in astronomical research. ESO operates three unique world-class observing sites in Chile: La Silla, Paranal and Chajnantor. At Paranal, ESO operates the Very Large Telescope, the world’s most advanced visible-light astronomical observatory and two survey telescopes. VISTA works in the infrared and is the world’s largest survey telescope and the VLT Survey Telescope is the largest telescope designed to exclusively survey the skies in visible light. ESO is the European partner of a revolutionary astronomical telescope ALMA, the largest astronomical project in existence. ESO is currently planning the 39-metre European Extremely Large optical/near-infrared Telescope, the E-ELT, which will become “the world’s biggest eye on the sky”.