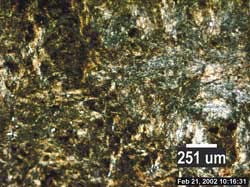 This image shows a liquid crystalline solution of sulfuric acid and SWNTs. The solution contains roughly 5.5 percent SWNTs by volume; acid dispersions have resulted in over an order of magnitude improvement in concentration over all previously documented methods.

Researchers at Rice University have discovered how to create continuous fibers of out of pristine single-walled carbon nanotubes. The process, which is similar to the one used to make Kevlar® on an industrial scale, offers the first real hope of making threads, cables and sheets of pure carbon nanotubes (SWNTs).

The research is available online today from the journal Macromolecules.

Scientists estimate nanotubes are about 100 times stronger than steel at one-sixth the weight. By comparison, Kevlar® — the fiber used in bulletproof body armor — is about five times stronger than an equal weight of steel. So far, no large-scale objects have been made of pure nanotubes due to a lack of processing methods that are viable on an industrial scale.

Rice’s team believes they have overcome the major hurdle to industrial production of macroscale SWNT objects — finding a way to store large amounts of nanotubes in liquid form. By dissolving nanotubes in strong sulfuric acid, a team of chemists and chemical engineers was able to achieve solutions containing up to 10 percent by weight of pure carbon
nanotubes — more than 10 times the highest concentrations
previously achieved. This new processing route uses no polymeric
additives or detergents, which were used in previous processing
methods and are known to be an obstacle to commercial scalability and final product purity.

“As the concentration increases, the nanotubes first align themselves into spaghetti-like strands and eventually they form tightly packed liquid crystals that can be processed into pure fibers,” said researcher Matteo Pasquali, assistant professor of chemical engineering.

Nanotubes are hollow cylinders of pure carbon that are just one atom thick. In addition to being very strong, nanotubes can also be either metals or semi-conductors, which means they could be used to manufacture materials that are both “smart” and ultrastrong. NASA, for example, is researching how nanotubes could be use in aircraft and spacecraft.

Chemically, carbon nanotubes are difficult to work with. They are strongly attracted to one another and tend to stick together in hairball-like clumps. Scientists have developed ways to untangle and sort nanotubes, but storing them after processing is difficult. To date, the medium of choice has been detergent and water solutions that contain less than 1 percent of dispersed nanotubes by volume and are processed by using polymer solutions. Such concentrations are too low to support industrial processes aimed at making large nanotube fibers. Moreover, scientists haven’t found a way to remove all the soap and polymer and convert the nanotubes back into their pure form.

“To produce large objects out of nanotubes, chemical processes must use a liquid that can disperse large concentrations of pristine tubes,” said Pasquali. “Based on our findings, we believe superacids can be used to make macroscale fibers and sheets of nanotubes using methods that are quite similar to those in widespread use by the chemical industry.”

###
This research was funded by the Office of Naval Research, NASA, the Robert A. Welch Foundation and the Nanoscale Science and Engineering Initiative of the National Science Foundation.

The paper is available online at:
http://pubs3.acs.org/acs/journals/toc.page?incoden=mamobx&indecade=0&involume=0&inissue=0.