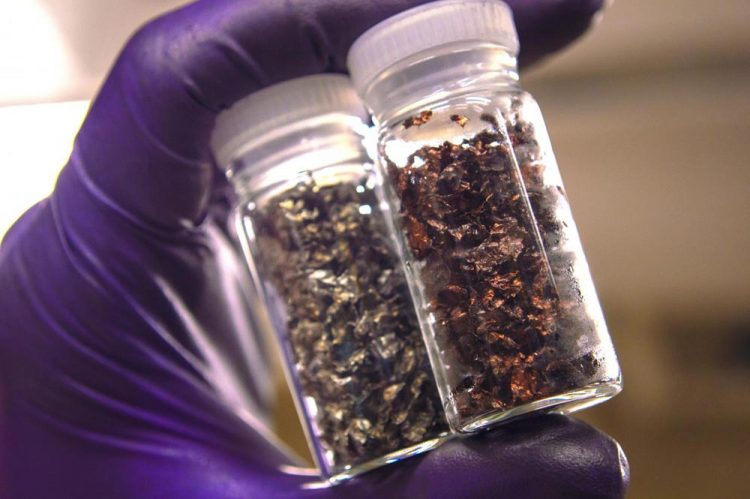 “We got a lot of 'oh wow!' responses, from eight-year-olds wanting to know how it worked to EPA officials wondering why no one had done this before,” says senior Zachary Oldenburg. “My response to the EPA was, 'Because no one else had a project leader who's a mining engineer.'”

Pan, an assistant professor of chemical engineering at Michigan Technological University, earned his graduate degrees in mining engineering. It was his idea to adapt 20th century mining technology to recycle lithium ion batteries, from the small ones in cell phones to the multi-kilowatt models that power electric cars. Pan figured the same technologies used to separate metal from ore could be applied to spent batteries. So he gave his students a crash course in basic minerals processing methods and set them loose in the lab.

“My mind goes back to the beginning, when nothing was working,” says Trevyn Payne, a chemical engineering senior. “A lot of times it was, honestly, 'Let's just try this.' Sometimes when things worked out, it was kind of an accident.”

Oldenburg provides an example. “We were trying all kinds of solvents to liberate chemicals, and after hours and hours, we found out that plain water worked the best.”

But eventually, everything came together. “You can see your results improve experiment by experiment,” explains doctoral student Ruiting Zhan. “That's pretty good. It gives you a sense of achievement.”

The team used mining industry technologies to separate everything in the battery: the casing, metal foils and coatings for the anode and cathode, which includes lithium metal oxide, the most valuable part. The components can be returned to the manufacturer and re-made into new batteries.

“The biggest advantage of our process is that it's inexpensive and energy efficient.” Ruitang Zhan

“For the purpose of remanufacturing, our recycled materials are as good as virgin materials, and they are cheaper,” Oldenburg adds.

The fact that their process is tried and true is perhaps its most attractive quality to industry, Pan notes. “We saw the opportunity to use an existing technology to address emerging challenges,” he says. “We use standard gravity separations to separate copper from aluminum, and we use froth flotation to recover critical materials, including graphite, lithium and cobalt. These mining technologies are the cheapest available, and the infrastructure to implement them already exists.”

Passers-by weren't the only ones at the P3 competition impressed by the students' effort. AIChE's (the American Institute of Chemical Engineers) Youth Council on Sustainable Science and Technology (YCOSST) has announced it will be presenting the team its YCOSST P3 Award, which recognizes the project “that best employs sustainable practices, interdisciplinary collaborations, engineering principles and youth involvement, and whose design is simple enough to have a sustainable impact without requiring significant technical expertise of its users.”

The team members, including Oldenburg, Payne, Zhan and undergraduate Lucille Nunneley, will be given the award in October, at the AIChE annual meeting in Pittsburgh, where they will also present their results. The award includes $1,000 to help cover student travel costs.

The project was funded by a $15,000 grant from the Environmental Protection Agency and an article on their work, “Recovery of Active Cathode Materials from Lithium-Ion Batteries Using Froth Flotation,” authored by Pan, Zhan and Oldenburg, was published online June 15 in Sustainable Materials and Technologies.