White, red, and blue signals alert you to dangerous germs! 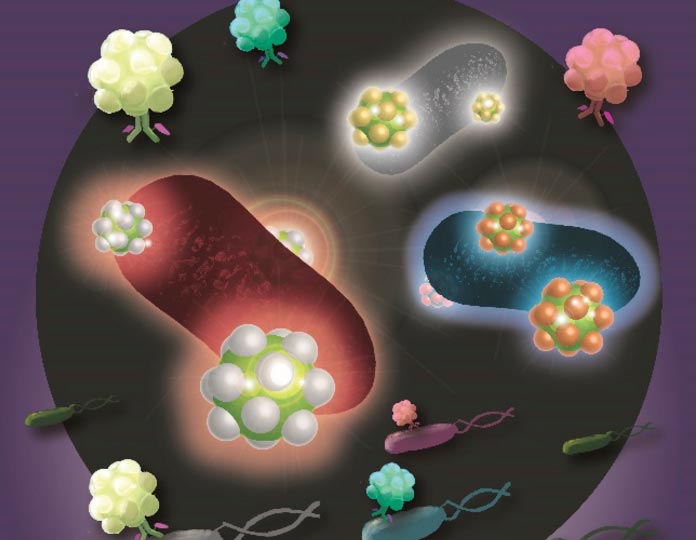 Success in rapid and simultaneous identification of multiple types of food poisoning bacteria by color differences in scattered light from metals.

Osaka Metropolitan University scientists have developed a simple, rapid method to simultaneously identify multiple food poisoning bacteria, based on color differences in the scattered light by nanometer-scaled organic metal nanohybrid structures (NHs) that bind via antibodies to those bacteria. This method is a promising tool for rapidly detecting bacteria at food manufacturing sites and thereby improving food safety. The findings were published in Analytical Chemistry.

According to the World Health Organization (WHO), every year food poisoning affects 600 million people worldwide—almost 1 in every 10 people—of which 420,000 die. Bacterial tests are conducted to detect food poisoning bacteria at food manufacturing factories, but it takes more than 48 hours to obtain results due to the time required for a bacteria incubation process called culturing. Therefore, there remains a demand for rapid testing methods to eliminate food poisoning accidents.

The team first found that organic metal NHs produced stronger scattered light than metal nanoparticles of the same size. Since the scattered light of these NHs is stable in the air for a long period of time, they are expected to function as stable and highly sensitive labeling materials. Furthermore, it has been revealed that these NHs exhibit different colors of scattered light (white, red, and blue) depending on the metal elements of the nanoparticles (gold, silver, and copper).

This method can identify various types of bacteria by changing the antibodies to be introduced. In addition, since it does not require culturing, bacteria can be rapidly detected within one hour, increasing its practicality as a new testing method.

Professor Shiigi commented, “We aim to establish new detection principles and testing methods through the development of unique nano-biomaterials. Through this development, we hope to contribute not only to food safety and security, but also to the formation of a safe and affluent society in terms of stable supply and quality control of functional foods, medical care, drug discovery, and public health.”