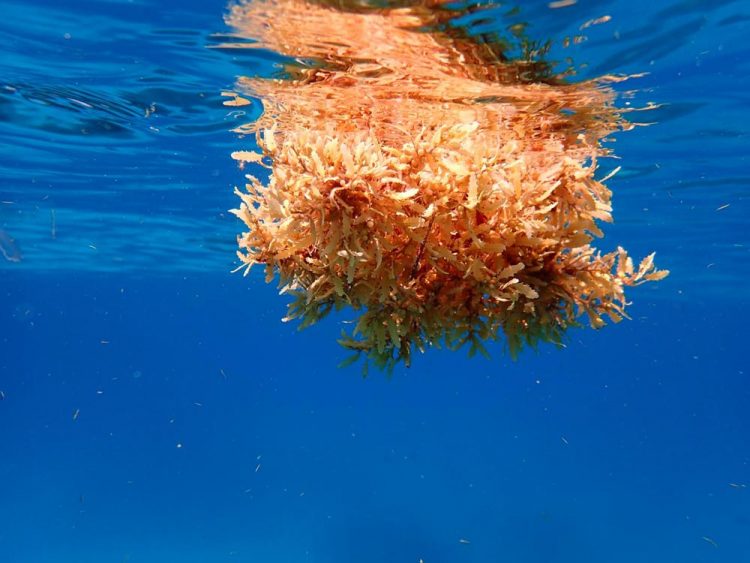 In recent years, large amounts of Sargassum have been washing up on beaches from the Caribbean to west Africa. This floating seaweed drifts on the oceans currents. New research explores how the Sargassum might grow while it is meandering along the currents, not just where it floats, combining both ocean physics and seaweed biology for the first time to understand the distribution patterns. Knowing could eventually help predict its arrival and impact on beaches around the world. Credit: University of Maryland Center for Environmental Science/Victoria Coles

Sargassum is actually a floating seaweed that drifts on ocean currents in the Atlantic Ocean, Caribbean, and Gulf of Mexico. It is unusual because it's the only seaweed in the world that never spends any part of its life cycle attached to the bottom. Sometimes called a golden floating rainforest, clumps of Sargassum–ranging in size from a softball to floating rafts miles long–are their own ecosystem.

“These Sargassum rafts provide key habitat and structure in the open ocean–fish, little crabs, and juvenile sea turtles spend a bunch of time in and around them,” said University of Maryland Center for Environmental Science graduate student Maureen Brooks, who studies the movement of Sargassum in the ocean.

New research explores how the Sargassum might grow while it is meandering along the currents, not just where it floats, combining both ocean physics and seaweed biology for the first time to understand its distribution patterns. Knowing could eventually help predict its arrival and impact on beaches around the world.

Beginning in 2011, unprecedented quantities of Sargassum began washing ashore along the Caribbean and Gulf of Mexico. Piles of stranded seaweed several feet thick covered tourist beaches in Puerto Rico and even Galveston, Texas, driving away tourists, smothering turtle nests, and increasing fish kills. And the inundations seem to be becoming more frequent.

“We started seeing larger amounts of Sargassum coming up from the Tropics,” said Brooks. “It has always been around, but recently there has been a lot more of it washing up on beaches from the Caribbean to west Africa.”

Brooks set out to discover what was driving these new seasonal changes. Knowing could help better predict where the Sargassum will travel–and how much of it will land on beaches, giving communities more time to prepare.

“I'm interested in how much of that seasonal pattern is driven by the biology–the growth of the seaweed–and how much was due to it moving around the ocean currents,” she said.

In a recent study, Brooks and her University of Maryland Center for Environmental Science co-authors Victoria Coles and Raleigh Hood showed that it's important to include both ocean physics and seaweed biology to understand the patterns of Sargassum we observe.

They looked at satellite observations from 2001-2012, monthly snapshots of Sargassum floating in the Atlantic Ocean to find what the average pattern–a program that runs on a supercomputer–to play out different scenarios of the seaweed's growth and travel along all the currents in the ocean. It's similar to dropping tens of thousands of ping-pong balls off in different points in the ocean and tracking where each one of them travels along the ocean currents.

“When we first ran the model, we placed Sargassum particles everywhere around the Atlantic and looked at what happened,” she said.

Researchers factored into the model for the first time how the Sargassum would grow while it was meandering along the currents, not just where it would float. “You need to include both ocean physics and seaweed biology to understand the patterns of Sargassum we observe,” she said.

They found that two regions influence the spread of Sargassum across the Atlantic.

Knowing the beginning Sargassum's ocean journey could eventually help predict its arrival and impact on beaches around the world.

“Hopefully we can use satellite data to better predict where it's going to be,” she said. “If we know more about how it's moving we might be able to predict it a little farther in advance.”

Brook's coauthored the paper, “Factors controlling the seasonal distribution of pelagic Sargassum,” with Victoria Coles and Raleigh Hood of the University of Maryland Center for Environmental Science's Horn Point Laboratory and satellite expert Jim Gower of Fisheries and Ocean Canada, Institute of Oceans Sciences. It was featured in the July issue of Marine Ecology Progress Series (MEPS).

The University of Maryland Center for Environmental Science leads the way toward better management of Maryland's natural resources and the protection and restoration of the Chesapeake Bay. From a network of laboratories located across the state, UMCES scientists provide sound evidence and advice to help state and national leaders manage the environment, and prepare future scientists to meet the global challenges of the 21st century. http://www.umces.edu