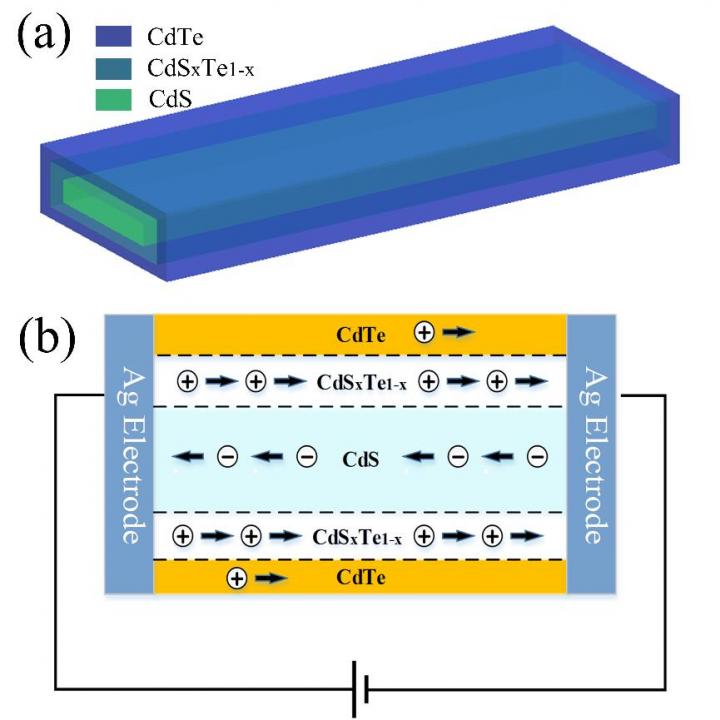 As a representative II-VI semiconductor, CdS is a promising material for visible-UV light detection. However, for pure NWs/NBs based photodetectors, fast photoresponse speed and high sensitivity cannot be achieved simultaneously because of the surface reaction.

Recently, group of Qing Yang in Zhejiang University demonstrates a CdS-CdSxTe1-x-CdTe core-shell nanobelt photodetector, which possesses both high sensitivity and fast speed. The CdS-CdSxTe1-x-CdTe nanobelts were fabricated by introducing CdTe in the growth of CdS nanobelt.

Because of the special growth condition, ternary crystal CdSxTe1-x alloy layers was formed between CdS and CdTe layers, thus CdS-CdSxTe1-x-CdTe core-shell structure was obtained. The fastest response time of this photodetector was demonstrated to be 11us, which is the fastest nanobelt photodetector based on CdS.

The improvement of the response speed is ascribed to the forming of heterojunction among CdS, CdSxTe1-x and CdTe layers, which suppresses the surface reaction. In addition, the detection light spectrum has covered a wide range from 355 to 785 nm. Compared with pure CdS or CdTe nanostructure-based photodetectors, the detection spectrum of this photodetector is much extended, covering the whole visible spectrum.

The responsivity and 3 dB bandwidth of the nanobelt photodetector reaches up to 1520 A/W and 22.9 KHz, respectively. Considering the simple fabrication process and the high performance in responsivity, response speed and detection spectrum, the CdS-CdSxTe1-x-CdTe NB photodetectors will find wide applications in optoelectronic nano devices such as optical communications, sensing and imaging.