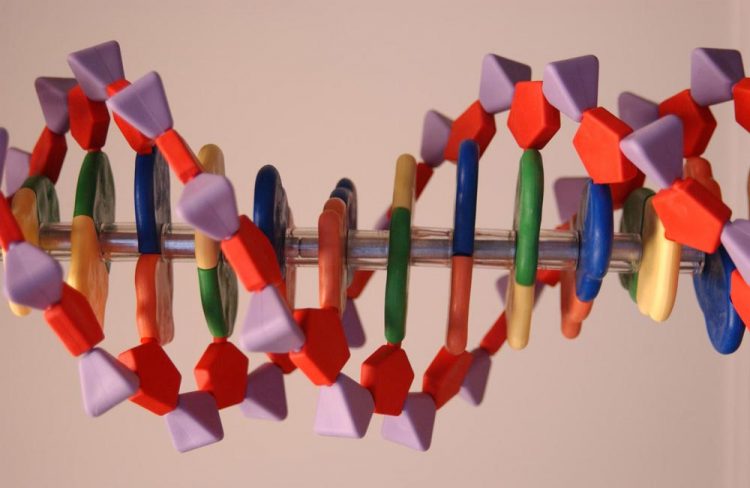 Each ribboning strand of DNA in our bodies is built from stacks of four molecular bases, shown here as blocks of yellow, green, blue and orange, whose sequence encodes detailed operating instructions for the cell. New research shows that tinkering with the order of these bases can also be used to tune the electrical conductivity of nanowires made from DNA. Credit: Maggie Bartlett, NHGRI

A team of researchers from Duke University and Arizona State University has shown how specific DNA sequences can turn these spiral-shaped molecules into electron “highways,” allowing electricity to more easily flow through the strand.

The results may provide a framework for engineering more stable, efficient and tunable DNA nanoscale devices, and for understanding how DNA conductivity might be used to identify gene damage. The study appears online June 20 in Nature Chemistry.

Scientists have long disagreed over exactly how electrons travel along strands of DNA, says David N. Beratan, professor of chemistry at Duke University and leader of the Duke team. Over longer distances, they believe electrons travel along DNA strands like particles, “hopping” from one molecular base or “unit” to the next. Over shorter distances, the electrons use their wave character, being shared or “smeared out” over multiple bases at once.

But recent experiments lead by Nongjian Tao, professor of electrical engineering at Arizona State University and co-author on the study, provided hints that this wave-like behavior could be extended to longer distances.

This result was intriguing, says Duke graduate student and study lead author Chaoren Liu, because electrons that travel in waves are essentially entering the “fast lane,” moving with more efficiency than those that hop.

DNA strands are built like chains, with each link comprising one of four molecular bases whose sequence codes the genetic instructions for our cells. Using computer simulations, Beratan's team found that manipulating these same sequences could tune the degree of electron sharing between bases, leading to wave-like behavior over longer or shorter distances. In particular, they found that alternating blocks of five guanine (G) bases on opposite DNA strands created the best construct for long-range wave-like electronic motions.

The team theorizes that creating these blocks of G bases causes them to all “lock” together so the wave-like behavior of the electrons is less likely to be disrupted by random wiggling in the DNA strand.

“We can think of the bases being effectively linked together so they all move as one,” Liu said. “This helps the electron be shared within the blocks.”

“This theoretical framework shows us that the exact sequence of the DNA helps dictate whether electrons might travel like particles, and when they might travel like waves,” Beratan said. “You could say we are engineering the wave-like personality of the electron.”

Other authors include Yuqi Zhang and Peng Zhang of Duke University and Limin Xiang and Yueqi Li of Arizona State University.