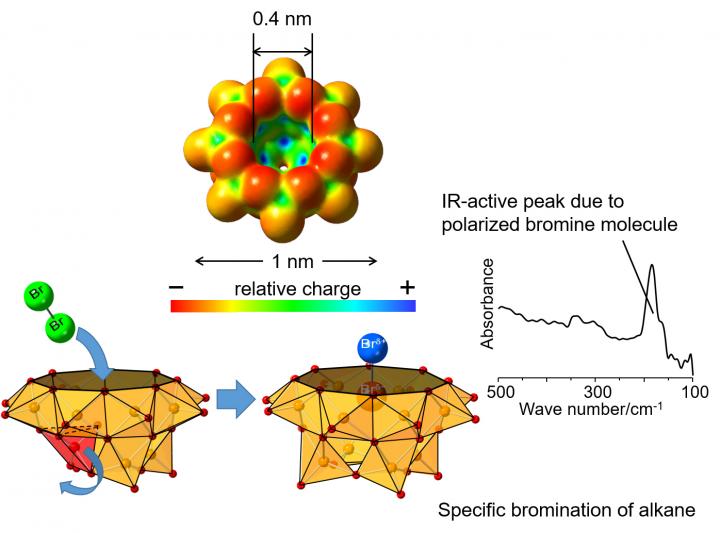 Peak of the spectrum due to polarized bromine molecule Credit: Kanazawa University

The bromine molecule (Br2) is widely used for bromination of a variety of organic compounds, where bromination reactions take place via a radical mechanism*2).

To attain product selectivity different from that of the radical mechanism, control of electron states of bromine molecule is needed.

Vanadium oxide clusters*3) are a group of materials with various structures that are expected to be useful as functional materials. A hemispherical vanadium oxide cluster having a cavity corresponding to the size of one halogen atom shows special charge distribution where the periphery of the cavity is relatively negatively charged while the inside is relatively positively charged.

Prof. Yuji Kikukawa of Kanazawa University previously revealed that the hemispherical vanadium oxide cluster took on a bulged structure in the presence of another compound being trapped in the cavity, whereas the structure was collapsed in the absence of a compound in the cavity (Angewandte Chemie, International Edition, 2018, 57, 16051-16055).

In the present study led by a research group of Profs. Yuji Kikukawa and Yoshihito Hayashi of Kanazawa University in collaboration with scientists from Ritsumeikan University and High Energy Accelerator Research Organization, it was revealed that a bromine molecule can be stabilized in the cavity of a hemispherical vanadium oxide cluster.

In addition, concerning another product, 2,3-dibromopentane, which consists of diastereomers*5), the ratio of the threo isomer was higher than when bromine molecules alone were reacted with pentane. Furthermore, bromination could take place with smaller alkanes with shorter carbon chain such as butane or propane.

As above, it was found that the bromine molecule trapped in the vanadium oxide cavity showed a specificity different from the radical mechanism for bromination reaction of alkanes.

Metal oxide clusters are able to perform oxidization and reduction while maintaining their structure. It is also possible to conjugate with other metal species and to replace some constituent metal atoms with other atoms.

Thus, the characteristics of metal oxide clusters can be regulated. Further developments are expected such as the activation of small molecules using such an atomic dimension cavity through controlling charge distribution in the cavity and the production of highly functional catalysts by controlling molecular-level structures.

It is also expected that selective functionalization reactions using methane, which is highly inert but whose efficient chemical modification is highly desirable, can be attained by improving materials that regulate the electron states.

*1) Functionalization
Atomic groups and bonds that characterize the properties and reactions of organic compounds.

*4) Polarization
A state in which the density of electrons on atoms is not equivalent but is asymmetrically distributed between the two directly bonded atoms.

*5) Diastereomers
Stereoisomers of chemical substances that are not mirror-image isomers (enantiomers). Diastereomers with two adjacent asymmetric carbons are called threo and erythro isomers and are distinguished.