Resistant against the flu 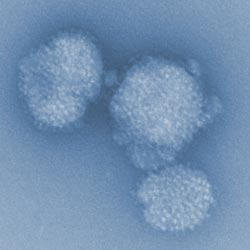 A new study published in the scientific journal PLOS Pathogens points out that mice lacking a protein called Tmprss2 are no longer affected by certain flu viruses.

The discovery was made by researchers from the Helmholtz Centre for Infection Research (HZI) in Braunschweig in collaboration with colleagues from Göttingen and Seattle.

Whether it is H1N1, H5N1 or H7N9: The flu virus influenza A exists in many different types as its two coating proteins haemagglutinin (HA) and neuraminidase (NA) can be combined in various ways. Theoretically, more than 100 different pairings are possible. Additionally, the coating proteins themselves can undergo changes. This variability is one of the reasons why the flu vaccination has to be renewed every year.

The virus uses haemagglutinin as a key to enter the host cell which is then captured to build new virus particles. To reach its final shape, the coating protein has to be cleaved by a molecular scissor. This is done by an enzyme of the infected host. Otherwise, the protein is not functional and the virus particles are not infectious. A variety of host enzymes, so-called proteases, that process the haemagglutinin have been identified using cell cultures.

Scientists from the HZI have now been able to show how important those enzymes are for the progression of the infection. Mice with a mutation in the gene for the protease Tmprss2 do not become infected by flu viruses containing haemagglutinin type H1. They are resistant against H1N1, the pathogen responsible for seasonal influenza epidemics, the “swine flu” and the “Spanish flu”, which caused an epidemic in 1918. “These mice do not lose weight and their lungs are almost not impacted,” says Professor Klaus Schughart, head of the Department “Infection Genetics” at the HZI. “Even though the virus still multiplies no active viral particles are formed which would infect the neighbouring cells.” The infection is quickly terminated.

As the protease Tmprss2 is a host factor it is an ideal intervention point for new drugs. So far, treatments, such as the well-known Tamiflu, attack parts of the virus. They have decisive disadvantages: The virus can become resistant and the therapy no longer takes effect. This problem does not occur when the medication intervenes with the metabolism of the patient. Furthermore, the mice Schughart and his team examined did not show any abnormalities. “We did not observe an obvious varied phenotype in these mice. They were neither impaired in their behaviour nor in their life expectancy. Presumably because other proteins are compensating for the lack of Tmprss2,” says Dr Bastian Hatesuer, one of the scientists involved in the project. Blocking TMPRSS2 for a short period could be a new therapeutic option as no strong side effects are expected.

Even though a drug like this is still a long way off, the observation is important for another reason: “Until now the dependence of virus production on proteases had only be demonstrated in cell cultures,” says Schughart. “We are the first to show this in a living organism.”

It is likely that there are humans having the same defect as the mice and who therefore may be resistant against specific flu viruses. This, however, remains unnoticed. “Because they don’t get sick, they don’t go to see a doctor,” says Hatesuer. “Thus, they don’t know that they are resistant.”

Original publication:
Bastian Hatesuer, Stephanie Bertram, Nora Mehnert, Mahmoud M. Bahgat, Peter S. Nelson, Stefan Pöhlman, Klaus Schughart
TMPRSS2 is essential for influenza H1N1 virus pathogenesis in mice
PLOS Pathogens, 2013, DOI: 10.1371/journal.ppat.1003774
Scientists of HZI’s “Infection Genetics“ department are studying how the genes of a host influence its defense against an infection with influenza A virus.
The Helmholtz Centre for Infection Research
Scientists at the Helmholtz Centre for Infection Research in Braunschweig, Germany, are engaged in the study of different mechanisms of infection and of the body’s response to infection. Helping to improve the scientific community’s understanding of a given bacterium’s or virus’ pathogenicity is key to developing effective new treatments and vaccines. http://www.helmholtz-hzi.de