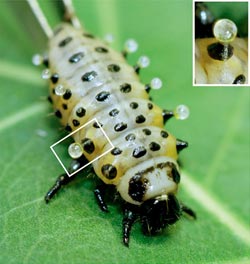 Poplar leaf beetles are able to transport salicin, which is found in their leafy diet, via several cell membranes into their defensive glands, where the substance is converted into the defensive compound salicyl aldehyde.

The research results not only shed light on the molecular evolution of the defensive system in leaf beetle larvae but also help to elucidate cell biological processes of sequestration in animal tissues.

Food chains and how to escape them

Leaf beetle larvae are part of food chains. They are attacked by predatory insects and parasites, such as hover flies and bugs. To protect themselves, some leaf beetle larvae have developed sophisticated mechanisms. Upon being disturbed, they emit a deterrent from their defensive glands as little droplets on their back. The defensive substances in the secretion are synthesized by the larvae from chemical precursors ingested when the larvae feed on leaves; instead of synthesizing these substances on their own, they save energy. In the case of the poplar leaf beetle, the chemical precursor is salicin, which is present in the leaf tissues of poplars and willows. A sophisticated transport network carries the precursors from the gut into the defensive glands. Only two more enzymatic steps are necessary in order to accumulate the defensive substance salicyl aldehyde in very high concentrations.

But how exactly does the transport work across the membranes of respective tissues? At which stage of the sequestration process does the selection take place? Which nutrients remain in the gut? Which are transported into the defensive glands and the toxic reservoir of the beetle larvae?

CpMRP: A gene highly expressed in the glandular cells

Anja Strauß, who wrote her PhD thesis in the Department of Bioorganic Chemistry at the Max Planck Institute for Chemical Ecology, unraveled the mystery of this mechanism. She studied the gene transcripts in the secretory cells of the poplar leaf beetle Chrysomela populi and found a gene which is 7000 times more expressed in the glandular tissue than in the gut tissue. Gene sequence analysis revealed that the scientists had cloned the gene for a so-called ABC transport protein. Such transport proteins are widespread and occur in almost all organisms, from bacteria to mammals. They also mediate multi-drug resistance, i.e. the resistance to pharmaceutically active compounds, transporting toxic substances potentially dangerous for the cell either away from the cell or into the tiniest cell organelles where they are rendered harmless. However, what role do ABC transporters play in leaf beetle larvae and how are they involved in the typical mechanisms of precursor accumulation in these insects? This was the crucial question Wilhelm Boland, director at the institute, asked.

Experiments clearly demonstrated that CpMRP − as the scientists named the transporter − is located in very large amounts in the membranes of small bubbles, the storage vesicles within glandular cells. As soon as the precursors of defensive compounds (here: salicin) are ingested and reach the cells, they immediately accumulate in the cells’ abundant vesicles with the help of ATP, the cell’s energy currency. This is where the name ABC transporter comes from: ATP-binding cassette transporter. The vesicles migrate within glandular cells in the direction of the reservoir, where they unite with the membrane barrier of the large reservoir and distribute their contents. The defensive compound salicyl aldehyde is then produced by the salicin precursor. In case of danger, the repellent is secreted from the tips of the glandular tubercles as the larvae assume a threatening posture

CpMRP functions as a pacemaker in this process: Thanks to its high transport capacities, CpMRP generates a decline in the concentration of salicin in the glandular tissue. As a consequence, there is a continuous and selective flow of salicin molecules via yet unknown transport proteins from the larvae’s bodily fluid. Should the CpMRP gene be switched off by means of RNAi, leaf beetle larvae without the transporter are no longer able to emit defensive compounds. This is how the key role of the transporter was demonstrated.

“It is fascinating that ABC transporters form a huge network within the glandular cells of the leaf beetle larvae which efficiently absorbs the toxins and traps them in storage vesicles,” says Anja Strauß. However: “The process we observed in those insects is not a detoxification process, but rather a well-directed accumulation of toxin precursors ingested by the larvae when they feed on leaves. These precursors are used economically to fend off predators.”

The identification of the CpMRP transporter not only sheds new light on the molecular evolution of the defensive system in leaf beetle larvae, it also demonstrates another important step in the elucidation of the biological basis of cellular sequestration and storage processes in animal tissues. [JWK/AO]