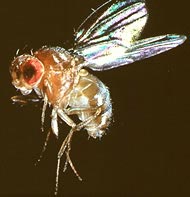 A resting result: flies hint at the chemistry of human sleep. <br>© SPL

Mutant flies that lack the chemicals sleep more. In mammals the same molecules are also involved in learning and memory, supporting the idea that one function of sleep is to consolidate our record of the day’s experiences1.

The molecules are cyclic AMP and CREB, chemical messengers that work within cells. Cyclic AMP activates CREB, which then switches on genes.

Joan Hendricks, of the University of Pennsylvania in Philadelphia, and her colleagues genetically altered fruitflies (Drosophila) to produce unusually low or high amounts of cyclic AMP, and thence CREB, or enhanced or reduced CREB alone.

Chemically enhanced flies slept less, deficient flies more. Flies that were low in active CREB needed more ’rebound’ sleep to compensate for their disturbed rest. “They weren’t fully awake for days afterwards,” says Hendricks. CREB may keep flies awake, and they may become sleepy as it is used up.

The genes and molecules involved in sleep have been a mystery. “We have essentially no understanding of the molecular basis of [sleep regulation],” says neuroscientist Fred Turek of Northwestern University, Illinois. The CREB/AMP discovery is a significant advance, he says.

There is a pressing need, Turek explains, for non-addictive drugs that can help insomniacs and the elderly to drop off and help shift-workers to adjust their sleeping patterns. There is also a demand for drugs that will keep people awake. “The US military is very, very interested in finding compounds that allow personnel to stay awake and alert,” Turek adds.

“It’s great to find a gene, but exactly what it’s doing is unclear,” cautions sleep researcher Paul Shaw, of the Neurosciences Institute in San Diego. There are many things that keep animals awake indirectly, he points out: “If you’ve got stomach ache, you’re not going to sleep well.”

A nod to learning

The connection between sleep and learning is tantalizing, but as yet unclear. “There’s an exciting link between the two, but it’s been somewhat maddening to get at,” says Shaw. Combining sleep deprivation and learning experiments in these flies might be a way forward, he suggests.

We can’t be sure that sleep in flies and mammals is the same – flies don’t have the same electrical patterns of brain activity. But behaviourally “the similarities are eerie”, says Shaw. “I believe that we can cautiously extrapolate from flies to mammals.”

Cyclic AMP and CREB are implicated in learning and memory in many organisms. Cyclic AMP helps flies form short-term memories. Mutants with low CREB have difficulty forming long-term memories; the memories of insects with extra CREB have been called ’photographic’.