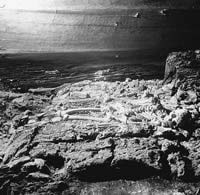 Midas’ rotten tomb bears the touch of his taste for meat

The gold-loving king’s rich diet may have hastened his decay.

Legend says that lust for gold was the cause of King Midas’ downfall. But his appetite for meat may have destroyed the final monument to his greatness1.

A mound excavated 44 years ago in Turkey is thought to be the resting place of the eighth-century BC ruler of Phrygia. The large tomb, although built of durable cedar wood, is in surprisingly bad shape, says geophysicist Timothy Filley of the Carnegie Institute in Washington DC. He has been studying the vault with a team of archaeologists and plant pathologists.

Nearly all the cedar in the tomb is severely damaged by tiny cavities typical of soft rot, a fungus that thrives in chilly, dank conditions. The worst decomposition is around the tomb of the king and on a small table nearby.

Having tracked the distribution of the nutrient nitrogen through the tomb, the researchers conclude that the king’s protein-rich remains fuelled the fungus’s spread through the building. “Midas’ consumption of meat must have been substantially above, say, the average American’s,” Filley says.

Unlike other fungi, soft rot needs large amounts of nitrogen to grow. “Wood has very little nitrogen, so there must have been external sources of nitrogen: probably the king and the remains of his funerary feast,” Filley explains. Midas’ mourners are believed to have marked his funeral with a huge barbecue of goat or sheep in his tomb, washed down with wine and beer2.

The study “shows that there is much more information in archaeological sites than we think about”, says Noreen Tuross, a biochemist at the National Museum of Natural History in Washington DC. “Archaeologists tend to regard decay as the evil thing that removes information,” she says. “But things do rot; this paper deals with that reality.”

Most of the nitrogen in nature is 14N. Animals also contain small amounts of the heavier form, 15N. The higher a creature is up the food-chain, the greater its proportion of 15N.

The percentage of 15N in the coffin was so high, Filley says, that the king must have regularly eaten large amounts of meat. The most decomposed wood from the table also had the highest 15N percentage, suggesting that nitrogen here came from funerary feast meat.

Transport by funghi is not the only possible explanation for the high levels of 15N inside the coffin and on the table, cautions Patrick McGovern of the University of Pennsylvania Museum of Archaeology and Anthropology in Philadelphia, whose team analysed Midas’ funerary feast in 1999.

If the king’s body had started to rot in its coffin before it was interred, for instance, liquids from the decomposing body could have leached into the wood. “The king probably lay in state while dignitaries from all over the kingdom travelled to attend the funerary feast,” he says. “It’s quite likely that the body was already partly decomposed by the time of the funeral.”

Filley now plans to take the nitrogen test to the Canadian high Arctic. His team hope to examine remains of the camp of explorer Adolphus Greeley, whose 1882 expedition to reach the North Pole ended in disaster when supply ships failed to reach his group. “Maybe we’ll be able to get a feeling for how they lived, and what kinds of foods they ate,” he says.