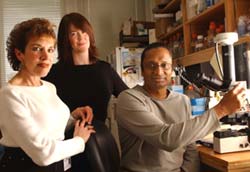 From left, Dr. Carole Mendelson, Dr. Jennifer Condon and Dr. Pancharatnam Jeyasuria have found evidence that a substance secreted by the lungs of a developing fetus contains the key signal that initiates labor.

A protein released from the lungs of a developing mouse fetus initiates a cascade of chemical events leading to the mother’s initiation of labor, researchers at UT Southwestern Medical Center at Dallas have found.

The research, which has implications for humans, marks the first time a link between a specific fetal lung protein and labor has been identified, said Dr. Carole Mendelson, professor of biochemistry and obstetrics and gynecology and senior author of the study. The paper appears in an upcoming issue of the Proceedings of the National Academy of Sciences and is currently available online.

The initiation of term labor is carefully timed to begin only after the embryo is sufficiently mature to survive outside the womb. Previous studies suggested that the signal for labor in humans may arise from the fetus, but the nature of the signal and actual mechanism was unclear, Dr. Mendelson said.

In their study, UT Southwestern researchers found evidence that a substance secreted by the lungs of a developing fetus contains the key signal that initiates labor. The substance, called surfactant, is essential for normal breathing outside the womb.

“We found that a protein within lung surfactant serves as a hormone of labor that signals to the mother’s uterus when the fetal lungs are sufficiently mature to withstand the critical transition to air breathing,” Dr. Mendelson said.

“No one really understands what causes normal or preterm labor. There may be several chemical pathways that lead to labor, but we think that this surfactant protein, which is also produced by the fetal lung in humans, may be the first hormonal signal for labor,” said Dr. Mendelson, who is co-director of the North Texas March of Dimes Birth Defects Center at UT Southwestern.

In humans the signaling protein, called surfactant protein A, or SP-A, also helps immune cells, called macrophages, fight off infections in the lungs of children and adults by gobbling up bacteria, viruses and fungi that infiltrate the lung airway.

This led the researchers to investigate whether there was a connection between what happens during normal labor at term and in infected mothers who go into early labor.

“This also raised the question: If bacterial infection can cause increased macrophage infiltration of the uterus in preterm labor, what is the signal for the enhanced macrophage migration to the uterus at term?” Dr. Mendelson said.

In mice, the developing fetal lung starts producing SP-A at 17 days gestation; full-term delivery occurs at 19 days. The developing human fetus starts producing SP-A in increasing amounts after 30 to 32 weeks of a 40-week normal gestation, at which time the baby’s lungs are essentially developed. As the fetus “breathes” amniotic fluid in the womb, the protein is released into the fluid.

“The SP-A protein binds to macrophages in the amniotic fluid, macrophages that come from the fetus itself,” said Dr. Jennifer Condon, a postdoctoral researcher in biochemistry and the study’s lead author.

The macrophages, “activated” by the protein, make their way through the amniotic fluid to the wall of the uterus. Once embedded there, they produce a chemical that stimulates an inflammatory response in the uterus, ultimately leading to labor.

The researchers also found that injecting a pregnant mouse with SP-A before day 17 of the pregnancy caused the mouse to deliver early. Injection of pregnant mice with an antibody that blocks SP-A function caused them to deliver late.

Identifying the receptors on the macrophages to which the SP-A protein binds will be the next step, Dr. Mendelson said.

“We think that bacteria may be binding to the same receptor on the macrophages to cause preterm labor in women. The bacteria mimic the function of SP-A, initiating the chemical reactions that lead to premature labor. If we knew more about this receptor on amniotic fluid macrophages, we may be able to design therapies or inhibitors to block preterm labor,” she said.

###
Other researchers participating in the study were Dr. Pancharatnam Jeyasuria, a research fellow in internal medicine and former fellow Julie Faust, now a medical student at Texas A&M University.

The research was funded in part by the National Institutes of Health and the Texas Higher Education Coordinating Board.

Small RNA as a Central Player in Infections