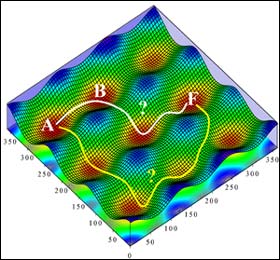 This metaphorical "mountain range" of peaks and valleys represents the different energy states which can be assumed by a tryptamine molecule, closely related to the brain-influencing substances serotonin and melatonin. A single tryptamine molecule can have several different configurations depending on how much energy it has received, and tends to stay in one configuration – represented by the red "valleys" on the chart – until enough energy is added to make it climb out of the valley and cross the range to another steady energy state. Tim Zwier’s group at Purdue University has used lasers to explore the precise energies required to move a molecule from one valley to another, making it far easier to determine the route tryptamine takes as it changes configuration. The work could impact the study of how proteins fold and could lead to new approaches to develop computer memory devices. (Purdue illustration/Timothy Zwier)

Purdue scientists have made an important biological molecule “swing,” in work that might clarify the process by which proteins fold as well as lead to new approaches to drug development and computer memory.

Using lasers to initiate and probe the folding process, a group including chemist Timothy Zwier have precisely determined the energies needed to twist tryptamine, a molecule with several flexible “hinges” that bears a close resemblance to an amino acid, the basis of proteins. Understanding the energy pathways that these molecules take passing from one conformation to another could provide new understanding of the elusive process of protein folding – an essential part of the development of these fundamental biological molecules. And though tryptamine forms only a tiny portion of a protein, a better understanding of this close chemical relative to serotonin and melatonin could provide insights into these other substances’ effect on the brain.

“If you want to know how molecules function in the body, you can’t just look at their structure – you have to look at the dynamics of how they change,” said Zwier, who is a professor of chemistry in Purdue’s School of Science. “On a small scale, we have found a way to look at the dynamic processes that makes one such molecule change shape. While we’re still a long way from understanding how proteins take on their complex shapes, this work could be a step in that direction.”

This research, which Zwier conducted with graduate student Jasper Clarkson and former student Brian Dian (now a postdoctoral researcher at the University of Virginia), appears in the current (Feb. 20) issue of the journal Science.

For the past several years, science magazines have regularly adorned their covers with intricate, multicolored spirals – illustrations that represent the recently revealed internal structure of proteins, some of the most complex molecules known. To attain their characteristic spiral shapes, proteins undergo a complicated process of folding that is still poorly understood because state-of-the-art imaging techniques can only provide images of proteins after they have finished folding. Since this dynamic process is a fundamental part of life on the molecular scale, scientists are keen to examine it more closely.

“Ideally, we would like to watch a protein being ’born,’ as it undergoes the intricate folding process that is needed to give it its final structure,” Zwier said. “We simply can’t do that yet on a molecule as large a protein, so we decided to examine tryptamine, a simpler molecule that also can fold in several different ways. Our hope is to learn something from it that can carry over to much larger molecules.”

Tryptamine is a close cousin of several well-known substances, namely serotonin, which plays a role in mood regulation, and melatonin, often used to treat jet lag. With a few additions to its molecular structure, tryptamine can form the amino acid tryptophan, which is incorporated with other amino acids in long chains to form proteins. The character of tryptamine fascinated Zwier because it has within its structure the molecular equivalent of a series of hinges – chemical bonds that allow parts of the molecule to twist into seven different shapes. Key to making the molecule twist was adding a bit of energy that could push the hinge in a different direction, giving the molecule a different configuration.

“Roughly speaking, it is hinges like this that allow a protein molecule to fold,” Zwier said. “Of course, proteins have many internal hinges and, therefore, millions of possible ways of twisting. Tryptamine only has a few, but even so, it has been difficult to know which of the seven possible shapes it would take if you excited it with a jolt of energy. So we tried to figure out precisely how much of a jolt was necessary to make it assume a particular shape.”

Zwier’s group mixed gaseous tryptamine with helium, which was used to cool the molecules to very low temperatures. They then excited the tryptamine molecules with lasers, a technique which allowed them to add precisely controlled amounts of energy to the mix. The method allowed the group to accurately determine the energy required to give tryptamine any of its seven configurations.

“This work has a particular elegance,” said Charles Pibel, program officer in the physical chemistry program at the National Science Foundation, which funded the group’s research. “Though Dr. Zwier is using techniques that have been around for a few decades, he’s using them in innovative ways. This work will appeal to lots of physical chemists for that reason.”

The appeal to industry is not as obvious as it might be to fundamental research, but Zwier said that there is potential for the work to inspire new approaches to problems confronting computer data storage.

“In tryptamine, we have a molecule that has seven different possible conformations – each of which could be viewed as a piece of information that could be changed with the application of light,” he said. “In principle, a larger molecule with far more conformations could be used to store vast amounts of information. I doubt tryptamine itself will prove to be the foundation of a new storage technology, but our experiment demonstrates a principle that could be applied to other molecules better suited to the job.”

Zwier also speculated that tryptamine’s chemical similarity to serotonin and other mood-related substances could lead to new basic knowledge about their function in the brain.

“For serotonin to bond to its receptor in the brain, it must change configuration,” he said. “More precise knowledge of the energy it must take from its environment could contribute to a better understanding of how serotonin binding in the brain leads to a change in mood.”

For the moment, Zwier said, such applications are a long way off, and the real achievement was for fundamental science.

“It’s more of interest to my professional colleagues than anyone else right now,” he said. “But it may prove inspiring to someone whose mind can twist the right way.”