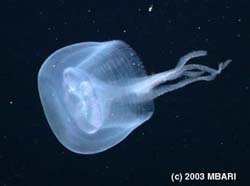 Stellamedusa ventana photographed during the MBARI 2003 expedition to the Gulf of California. <br>Image credit: (c) 2003 MBARI

Wart-like bumps of stinging cells cover the feeding arms and bell of a newly described deep-sea jelly, published by MBARI biologists in this month’s issue of the Journal of the Marine Biological Association of the United Kingdom. This softball-sized, translucent jelly moves through the water like a shooting star, trailing four fleshy oral arms–but no tentacles–behind it. This and other unique features resulted in the jelly’s categorization as a new genus and species.

The MBARI researchers named the jelly Stellamedusa ventana. Its genus, Stellamedusa, refers to the jelly’s translucent blue-white color and trailing arms, which reminded the scientists of a slow-moving meteor or shooting star. It’s species name, ventana, refers to MBARI’s remotely operated vehicle (ROV) Ventana, a deep-diving submarine robot that first recorded the jelly on video in 1990. Before they created an official name for this animal, researchers gave this jelly the nickname “bumpy” because it’s bell and oral arms are covered with small bumps, which are actually clusters of stinging cells that the jelly uses to capture prey.

Kevin Raskoff, primary author of the paper, says of the new jelly “Although it’s highly unusual for a jelly not to have tentacles, several deep-sea species have evolved this way. They have also evolved unusual feeding strategies, which rely on other parts of their body, such as the bell and oral arms, to capture prey.” Formerly a postdoctoral researcher at MBARI, Raskoff now teaches at California State University, Monterey Bay.

MBARI researchers have seen S. ventana only seven times during thirteen years of diving. Five of these observations were in Monterey Bay. The other two occurred during an MBARI expedition to the Gulf of California in spring 2003. According to George Matsumoto, co-author of the paper, “This animal still represents a conundrum. At first we thought it might be just a very rare local species, here in Monterey Bay. Then we saw it twice in the Gulf of California, three thousand miles away. We still have no idea of its true range.”

The researchers waited years to publish their discovery of this jelly because they wanted to be able to present information about its habits and distribution, as well as its appearance. As Matsumoto put it, “you need enough observations to understand the natural variations in the animal’s size and shape. We just didn’t have enough information to make any general statements about the animal.”

Here is some of what they do know: S. ventana has been observed at depths between 150 and 550 meters (about 500 to 1800 feet), just below the level that sunlight can penetrate, but above a layer of very low oxygen levels. This region is known as the mesopelagic realm, and is the home of entire communities of gelatinous animals. In fact, based on field and lab observations, the researchers believe that this jelly may feed primarily on other jellies.

To study the jelly’s eating habits, the researchers placed a captured jelly in a tank with small shrimp and pieces of squid. The shrimp and squid collided with batteries of stinging cells on the jelly’s bell and stuck there. The prey then moved slowly down to the edge if the bell. At that point, the jelly transferred the prey to one of its oral arms, where it slowly moved up the arm and into the mouth.

Unlike other jellies who capture food with their bells, S. ventana seemed to prefer prey larger than about 2 cm (3/4 inch). In fact, one individual captured in the Gulf of California had in its gut a ctenophore about 5 cm (2 inches) across. Raskoff speculates that the bumps on the jelly’s bell and arms may aid in capturing large pray. “These bumps contain massive batteries of stinging cells, which are good for holding on to prey as well as immobilizing it.”

Matsumoto is somewhat surprised that S. ventana has never been described previously or hauled up in nets. “The coast of California is one of the more well-studied parts of the world’s oceans, with two major oceanographic institutions dating from the late 1800s. Yet we are still discovering new species there. Who knows what else we might find?” Raskoff adds, “It’s heartwarming to know that there’s still a lot of mystery in the deep ocean. There are still a lot of big things moving around out there that we don’t know about.”