Knowing when to flower 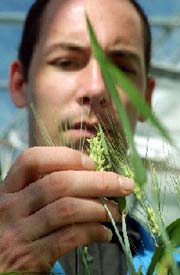 The secret of flowering in our major food crops like wheat has been revealed with the discovery by CSIRO Plant Industry of a gene that triggers flowering in cereals.

“Flowering is important because it determines when the plant will produce grain or fruit – the parts we usually eat.”

WAP1 turns ’on’ to activate flowering when the cereal plant is at the right stage of development and when environmental conditions are suitable.

For example, in winter wheat, WAP1 and hence flowering is activated after a cold period, like winter. Spring wheat, however, flowers without exposure to cold because its version of WAP1 does not require a cold period to start it.

“Different flowering times in wheat are one of the key traits that wheat breeders have bred for since wheat breeding began,” says Dr Trevaskis.

“This breakthrough discovery of WAP1 means a piece of the flowering puzzle has been found. It helps us understand what breeders have been manipulating for thousands of years, but there is still a lot of work ahead of us to fully unravel the flowering process.”

In the future WAP1 could be used to help breed cereal plants that flower when needed.

“WAP1 could be used to modify flowering time in cereals. Experiments are now underway to see if spring wheats can be made to flower even earlier using more active versions of WAP1,” says Dr Trevaskis.

“WAP1 could potentially also be used to block flowering in grasses that cause allergies and prevent sugarcane flowering, allowing it to put more resources into cane production.”

The discovery of WAP1 has been simultaneously confirmed in the USA and Canada where scientists have independently identified the same gene for cereal flowering.