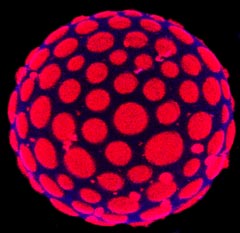 A giant unilamellar vesicle (GUV) designed to mimic so-called rafts of lipid segregation in cell plasma membranes, when examined under multiphoton fluorescence microscopy, reveals boundaries (in blue) between optically resolvable domains (red). The GUV, made of sphingomyelin, cholesterol and another phospholipid, is approximately 30 micrometers in diameter. Copyright © Nature. Photomicrograph by DRBIO/Cornell.

Cell membranes — the sacs encompassing the body’s living matter — can assume a variety of shapes as they morph to engulf materials, expel others and assemble themselves into tissues.

In the past it was possible for theoreticians only to analyze the thermodynamic forces behind membrane shape-shifting. But now a team of biophysicists from Cornell University, the National Institutes of Health and the W.M. Keck Foundation has been able to watch the sacs, or vesicles, reshaping themselves under the light of multiphoton three-dimensional microscopy. The forces behind the membrane morphing, the researchers say, is akin to a party entertainer shaping balloon animals by tensioning the surfaces.

Their report on observing the membranes — a laboratory-grown mixture of phospholipids and cholesterol — being reshaped into two separate, two-dimensional liquid phases, or “rafts,”

appears in the latest issue of the journal Nature (Oct. 23, 2003; vol. 425, pp. 821-824) and is illustrated on the magazine’s cover. The findings, say the researchers, should help cell biologists understand the functions of cell membranes that are important to human health.

The interactions observed between separate phases of shape-shifting fluid membranes generally confirmed predictions made by German theoretician Reinhard Lipowsky and his colleagues. The observations also enabled measurement of the energetic tensions of the interphase lines separating the membrane rafts. In the immune system, defending macrophages engulf microbes and enclose the invaders in vesicles. “The same physical processes that we see in model membranes systems may be involved in controlling the budding and fission of these vesicles in cells,” Baumgart says.

Molecular rafts of different compositions are believed to be involved in cell-membrane processes, Webb says, “but the physics of raft formation is not well understood. We hope our experiments — based on 3-D-resolved multiphoton microscopy to illuminate membrane domains and transition behavior — will encourage others to join in this study.”

Baumgart emphasizes that balloon animals are not a perfect analogy for shape-shifting vesicles. “For one thing, rubber balloons stretch and vesicle membranes don’t, but seeing these shapes from a distance, we can imagine some of the same forces at work,” he says.

Zooming in with the multiphoton microscope, Baumgart and his colleagues looked at a simplified model of cell membranes. In nature, vesicles are a complex mixture of several kinds of lipids, proteins and impurities; Baumgart’s laboratory-grown vesicles were made of just three kinds of lipids — sphingomyelin, dioleylphosphatidylcholine and cholesterol. Fluorescent dyes that light up under the microscope’s laser beam were used to label different membrane phases either red or blue. The researchers found that, depending on the temperature, a cell membrane can have several fluid phases with different physical properties at the same time — something like oil and water on the same surface.

Baumgart says the simplified vesicles produced a wide assortment of exotic shapes and structures as the temperature was changed, processes that appear to involve the disappearance of boundary-line tension as the two phases merge into a single one at higher temperatures.

The study was supported, in part, by a National Institutes of Health grant to the Developmental Resource for Biophysical Imaging Opto-Electronics (DRBIO) at Cornell and by a Keck Foundation grant to Baumgart. Multiphoton microscopy is a patented process developed at Cornell by Webb, who also is the Eckert Professor in Engineering and director of DRBIO, and by Winfried Denk, who now is a director at Germany’s Max-Planck-Institut für Medizinische Forschung Biomedizinische Optik.

The title of the Nature article is “Imaging coexisting fluid domains in biomembrane models coupling curvature and line tension.”