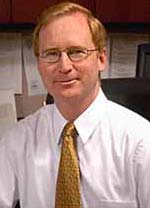 Scientists here have found that a protein in the retrovirus known as human T-cell lymphotropic virus type 1 (HTLV-1) can cause immune cells to divide and proliferate, helping the virus spread through the body.

The protein, known as p12, was formerly thought to be unimportant during infection, causing scientists to regard it as a nonessential “accessory gene.”

This new study, however, shows that the protein forces infected cells to produce interleukin 2 (IL-2), a substance that stimulates the growth and proliferation of immune cells known as T lymphocytes, or T cells, which are the virus’s chief target. The study was published in the Oct. 15 issue of the Journal of Virology.

“Our findings help explain why lymphocytes divide and proliferate in people following HTLV-1 infection,” says lead investigator Michael D. Lairmore, professor and chair of veterinary biosciences, professor of molecular virology and associate director for basic sciences at the Ohio State University Comprehensive Cancer Center. “The findings also support the view that this virus replicates mainly by causing infected cells to divide and proliferate rather than by generating more virus particles.”

The study provides insight into the biology of HTLV-1 and the changes lymphocytes undergo as they become cancerous. The findings also may lead to safer, more effective drugs to treat the leukemias, lymphoma, and autoimmune-like diseases caused by the virus.

HTLV-1 infects 15 to 25 million people worldwide, particularly in Japan and in the Caribbean region. It specifically attacks immune cells known as CD4 lymphocytes, where it inserts its genome, or genetic material, permanently into a chromosome. In some people the virus causes adult T-cell leukemia/lymphoma, a cancer that responds poorly to treatment and that can cause death within six months of diagnosis. In others, it causes crippling and painful autoimmune-like disorders.

Copies of the p12 gene were transferred into both cell types. Then the genes were activated as they would be during HTLV-1 infection, causing the cells to produce p12 and IL-2. After several days, the cultured cells produced twice the level of IL-2 compared to control cells, and the normal lymphocytes produced levels six-fold higher than controls.

“A similar two-to-six fold increase in IL-2 production by infected T cells during normal HTLV-1 infection in the body would lead to a significant increase in lymphocyte numbers in the blood,” says Lairmore.

“Overall, our evidence suggests that this protein plays a vital role in early HTLV-1 infection.”