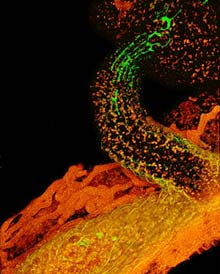 Pollen tubes (red tubules) from the pop2 mutant grow in a tangled mass within female tissues. Rather than efficiently growing up to an ovule (upper right), they instead gather at the ovule’s base. <br> <br>Photo: Anna Edlund <br>

Nearly 80 percent of the world’s food begins as seeds, including such staple crops as corn, wheat and rice. Despite the importance and ubiquity of seeds, researchers have learned precious little about the processes that regulate plant fertilization, the essential first step in seed formation.

Now, Howard Hughes Medical Institute (HHMI) researchers have identified a key molecular signal that regulates the growth and guidance of the “pollen tube,” a tunnel formed by the pollen grain that aids in fertilizing the plant’s eggs. They say their initial findings could open a new route to understanding the multitude of interacting control signals that likely guide the pollen tube on its crucial journey.

In an article published in the July 11, 2003, issue of the journal Cell, HHMI investigator Daphne Preuss and her colleagues at the University of Chicago report that the molecule gamma-amino butyric acid (GABA), best known for its role as a neurotransmitter in the mammalian nervous system, is a key signaling molecule that triggers plant reproduction.

“When a pollen grain is deposited on the surface of a flower, it’s like a speck of dust landing on the skin,” said Preuss. “The fertilization process is unlike that in animals, in which the sperm swim through a well-defined cavity. Instead, this pollen grain somehow has to grow a tube from the stigma of the flower, digesting tissue to burrow all the way inside to where the eggs are.

“While a few molecules involved in this process have been identified over the years, we really still don’t understand how this tube gets from start to finish,” said Preuss. “And since the world’s agriculture depends so profoundly on plant fertility, understanding this process is fundamentally important.”

The study began when co-author Laura Brass analyzed a peculiar mutant form, called pop2, of the plant Arabidopsis. A member of the mustard family that also includes cabbage and radish, Arabidopsis is the most popular plant model for biologists, since it is small, prolific, easily grown and has a rapid life cycle.

“When we saw the pollen tubes in pop2 just winding around and totally missing their targets, it just seemed like this was a mutant worth studying,” said Preuss. After laboriously identifying genetic markers in the pop2 genome, Brass pinpointed one specific gene that caused the defect observed in the pop2 mutant. The researchers named the gene POP2.

Lead author of the Cell paper, Ravishankar Palanivelu, compared the sequence of the defective protein produced by the gene POP2 to other known proteins and concluded that it was an enzyme called an aminotransferase. However, it was not until the researchers analyzed an extract of the mutant plant — discovering a hundred-fold elevation in GABA — that they learned which plant molecule the enzyme normally degraded.

Further studies using fluorescent-labeled antibodies to GABA confirmed that the chemical normally concentrates in the pollen tubes near the egg-containing ovule. In contrast, in the pop2-mutant plants, GABA is diffused throughout the tissues.

The researchers did antibody staining and microdissection of normal Arabidopsis ovules, which revealed a concentration gradient of GABA that could act as an attractant for the pollen tube. However, they found, such a gradient was lacking in the pop2-mutants, because the malfunction of the enzyme that breaks down GABA produces a massive increase in the chemical signal. Also, in vitro experiments revealed that pollen required GABA to stimulate growth of pollen tubes. Finally, the researchers conducted studies of various crossbred plants that demonstrated the requirement for a GABA gradient in pollen tube guidance.

“So, in the mutants, the pollen tubes are just overwhelmed with signal, like someone staring at the sun and trying to find their way,” said Preuss. “But in the wild-type plants, the pollen tubes have the molecular equivalent of just the right amount of light to guide them where they need to go.”

According to Preuss, identifying GABA as a key pollen-tube guidance signal represents only the beginning of their exploration of the pollen-tube guidance control machinery. For example, she said, to gain further insight into the machinery, the researchers are analyzing other mutants affecting pollen tube growth, as well as the reproductive metabolic changes in the tissues as they develop.