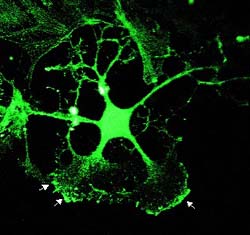 A new study links a protein discovered a few years ago at the University of North Carolina at Chapel Hill with formation of scar tissue that occurs after injury to nerve cells in the brain or spinal cord.

Such scarring apparently blocks neurons of the central nervous system from recovering after traumatic injury – inhibiting their axon filaments from regenerating and ferrying nerve impulses elsewhere, to other neurons and tissue, including muscle. Loss of nerve cell function and paralysis can result.

The findings, published online today (June 4) in the journal Molecular and Cellular Neuroscience, add new knowledge to a long-standing issue in neuroscience: why do nerve cells in the peripheral nervous system grow back after an injury such as a skin cut, but cells in the brain or spinal cord do not.

“One school of thought has it that there’s something fundamentally different in the neurons of the central nervous system versus the peripheral nervous system. This is likely not to be a major factor,” said Dr. Carol A. Otey, assistant professor of cell and molecular physiology at UNC School of Medicine and the study’s senior author. “The second school of thought is that there are chemical changes that occur in an area of injury that are specific to the brain and spinal cord, changes that repel injured neurons from being able to re-extend their axons. And this is now known to be true.”

Added Otey: “Also thought to be true is that a physical barrier forms to prevent axon regeneration. And that’s what we’re most interested in, this barrier that’s called the glial scar.” When neurons are cut, star-shaped glial cells called astrocytes migrate to the area and weave together to form a glial scar. (Glia are cells that help provide support for neuronal functioning.)

“If the neuron has survived and tries to re-extend its axon, it can’t go through this barrier,” Otey said. “The question is, what occurs at the molecular level that’s allowing these astrocytes to behave this way, to move towards the lesion, to change their shape and form a barrier?”

Enter palladin, the protein Otey and her colleagues identified at UNC in 2000.

Named after the 16th century architect, Andrea Palladio, the protein appears to be involved in the architecture of cells, playing a key role in determining cell shape and allowing cells to move.

“We had seen palladin expression correlate with motility in other cell types. So we began by asking if palladin is found in adult mature astrocytes. And it isn’t,” said Otey.

But, in the new research, Otey, along with lead author and instructor in cell and molecular physiology Dr. Malika Boukhelifa and others, found that palladin levels increase, are “upregulated,” following traumatic injury to the central nervous system.

“We asked this first in tissue culture model, where we had a monolayer of cultured astrocytes. And we could just very easily scrape the monolayer to mimic injury, fix the cells at different time points and check for protein expression,” Otey said. Fluorescence microscopy was used to visualize the expression of the protein.

In collaboration with the laboratory of neuroscientist Dr. Juli Valtschanoff, assistant professor of cell and developmental biology, the researchers extended their tissue culture palladin investigations to an animal model, the adult rat. A tiny lesion was made in the animals’ brain with a glass needle and time points after injury were recorded.

The researchers then used fluorescence immunostaining and microscopy to examine the lesion area for palladin expression.

“Just a few hours after a lesion there are these brightly palladin-positive astrocytes close to the lesion, with more appearing at later times,” Otey said. “And this is quite persistent. At seven days after injury, there’s this beautiful zone of high levels of palladin expression right around the injury.” Thus, according to Otey, the above findings show rapid and persistent palladin expression in cells close to a lesion, in cells that are known to change their shape and to move.

“Now it became important to ask if palladin expression is what causes cells to change their shape?” This was addressed in tissue culture experiments. Using gene transfer methods, astrocytes were “transfected” either with palladin and green fluorescent protein (GFP) or with GFP alone. Cells treated with palladin and GFP lost their stellate, or star-like, shape and became polygonal, thickened and flattened. Cells transfected with GFP alone did not. In addition, palladin-transfected cells also displayed signs of structural changes previously associated with injury and shape change. “So it would appear that palladin is controlling astrocyte cell shape,” Otey said.

Might the findings suggest a possible novel therapeutic avenue for central nervous system cell regeneration after injury – whether it be stroke, traumatic injury or repeated epilepsy seizures?

“If palladin upregulation is allowing the astrocytes to form the glial scar, then one approach to enhancing recovery to injured CNS nerves might be to prevent that upregulation,” Otey said.

Still, the researcher and her co-authors caution that more work is needed. Experiments now underway are aimed at designing a “knock-out” animal model in which astrocytes cannot express the protein after injury. The researchers will then be able to determine if glial scar formation is attenuated and if doing so will enhance injury recovery.

“It’s likely that in the end we’ll find out it’s more complicated than it is in cell culture,” Otey said. “We may learn that the glial scar may be necessary, as it’s unlikely that this structure had evolved simply to cause paralysis.

“It may be necessary to allow the glial scar to form up to a point, then attenuate formation of the scar. It probably serves some function to isolate the area of injury, maybe to prevent an inflammation response. We don’t know. It will be interesting to see, first of all, if it’s sufficient to allow regrowth of axons by preventing the glial scar, or will doing so generate other problems we haven’t anticipated? Indeed, it will be interesting to do these experiments.

Along with Otey, Boukhelifa and Valtschanoff, other co-authors were a visiting scientist from South Korea, Dr. Se-Jin Hwang, Dr. Aldo Rustioni of cell and developmental biology, and Dr. Rick B. Meeker of neurology. The study researchers are members of the UNC Neuroscience Center.