Pushing the limits of 2D supramolecules 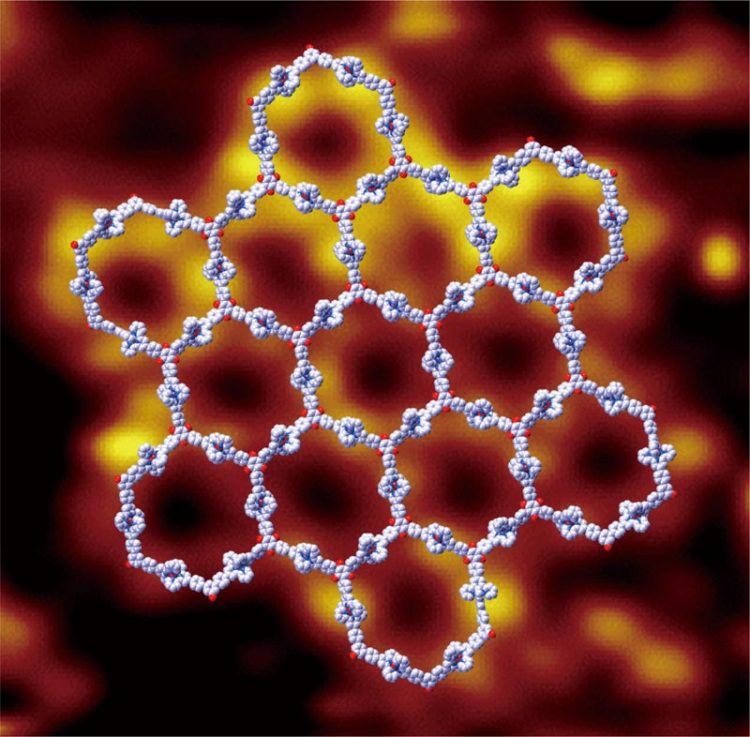 A scanning tunneling microscopy image of the USF-developed supramolecular grid with a molecular modelling overlay. Credit: University of South Florida

Since the 2004 discovery of graphene, the world's thinnest (one-atom-thick) and strongest (200 times stronger than steel) material, researchers have been working to further develop similar nanomaterials for industrial, pharmaceutical and other commercial uses.

Thanks to its conductive properties and strength, graphene can be used in microelectronics to fortify mechanical materials and has recently enabled precise 3D imaging of nanoparticles.

While work to develop new supramolecules capable of further applications has seen some success, those molecular formations are either small – less than 10 nanometers in size – or arbitrarily assemble, limiting their potential use. But now, new research published in Nature Chemistry, outlines a profound leap forward in supramolecular progress.

“Our research team has been able to overcome one of the major supramolecular obstacles, developing a well-defined supramolecular structure that pushes the 20-nanometer scale,” said Xiaopeng Li, an associate professor in the USF Department of Chemistry and the study's lead researcher. “It's essentially a world record for this area of chemistry.”

Li, along with his USF research team, collaborated with Saw Wai Hia's team at the Argonne National Laboratory and Ohio University, as well as several other U.S. and international research institutes on this effort.

Supramolecules are large molecular structures made up of individual molecules. Unlike traditional chemistry, which focuses on covalent bonds between atoms, supramolecular chemistry studies the noncovalent interactions between molecules themselves.

Many times, these interactions lead to molecular self-assembly, naturally forming complex structures capable of performing a variety of functions.

In this latest study, the team was able to build a 20-nm-wide metallo-supramolecular hexagonal grid by combining intra- and intermolecular self-assembly processes.

Li says the success of this work will advance further understanding of the design principles governing these molecular formations and could one day lead to the development of new materials with yet-to-be-discovered functions and properties.