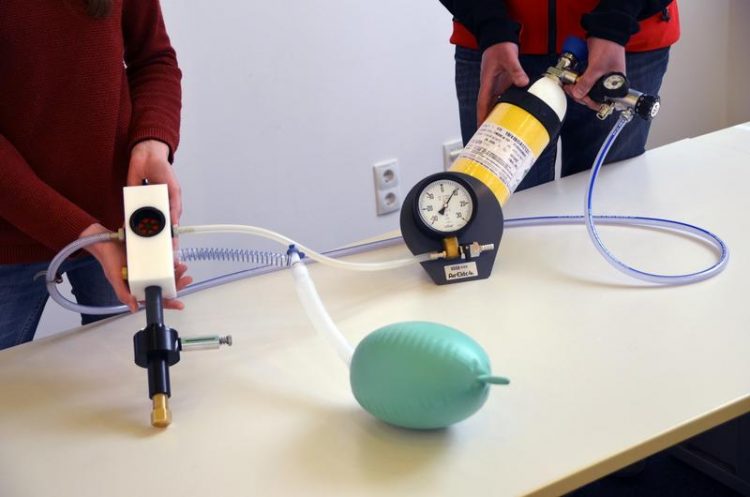 To this end, the mine rescue team of TU Bergakademie Freiberg and the Institute for Machine Elements, Design and Production have combined their expertise.

“We know how ventilators work and Prof. Matthias Kröger and his design team know how to build such devices”, explains Frank Reuter, head of mine operations in the research and training mine “Reiche Zeche” at TU Freiberg.

The first prototype has already been produced and is currently undergoing various tests to check and further improve its functions. No electricity is required to operate the emergency ventilator, only compressed air or oxygen.

It mainly consists of a control piston with which different parameters, such as the ventilation pressures during inhalation and exhalation (PIP, PEEP) or the respiratory rate, can be adjusted.

In addition, the oxygen concentration can be optionally controlled. Those are important factors to be able to ventilate emergency patients who have been infected with a lung disease.

The scientists from Freiberg focus mainly on the supply of lung care in poorer countries with little technical know-how and a high population density.

“Our prototype is designed in such a way that it can be reproduced, maintained and cleaned with simple means and a few tools,” explains Dr. Robert Szlosarek from the Chair for Machine Elements at the TU Bergakademie Freiberg.

The scientists would like to communicate their idea to groups engaged in development aid and embassies.