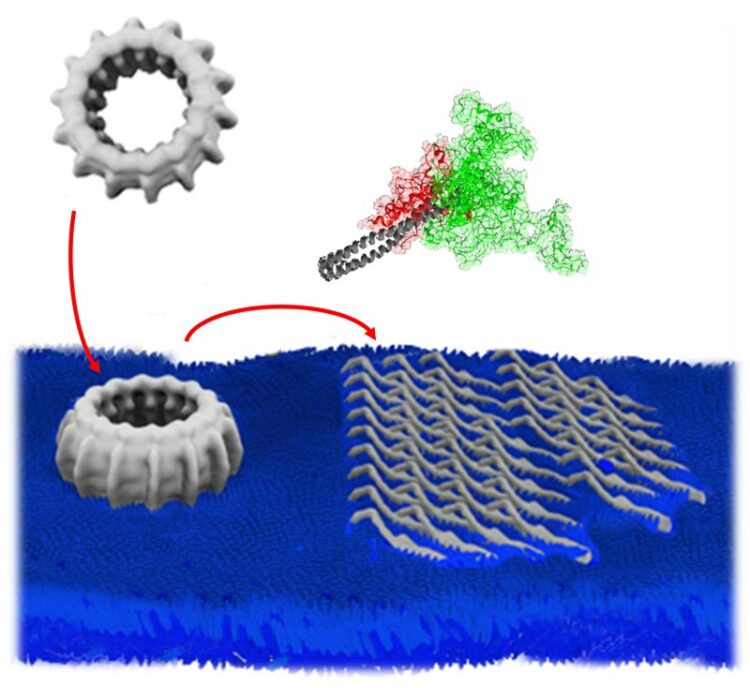 Stress is present everywhere, even bacteria and plant cells have to cope with it. They express various specific stress proteins, but how exactly this line of defense works is often not clear. A group of scientists headed by Professor Dirk Schneider of Johannes Gutenberg University Mainz (JGU) has now discovered a protective mechanism in cyanobacteria as well as in chloroplasts of plant cells: Complex ring structures formed by a protein attach to cell membranes and dissociate. Thereafter, the individual proteins spread out on the membrane surface and form a carpet structure. “Via formation of such a shield, bacteria and chloroplasts protect their membranes under certain stress conditions,” stated Professor Dirk Schneider, head of the Membrane Biochemistry section at the JGU Department of Chemistry.

The biochemist and his team have examined the protein IM30, i.e., the inner membrane-associated protein having a mass of approximately 30 kilodaltons. Previous studies have already shown that the IM30 protein is involved in the formation and preservation of membranes in photosynthetic cells. Without IM30, the amount of thylakoid membranes, in which the photosynthetic light reaction occurs, decreases, ultimately resulting in cell death. The hitherto unknown molecular mechanism of membrane stabilization has now been observed and revealed in detail. The results of this collaborative research project have recently been published in the Nature journal Communications Biology.

“For quite some time now, we were well aware that IM30 is somehow related to stress. However, we did not know how exactly these proteins manage to protect the cells on a molecular level”, explained Schneider. Employing biochemical and biophysical methods in cooperation especially with Professor Stefan Weber of the Max Planck Institute of Polymer Research in Mainz and Professor Eva Wolf of the Institute of Molecular Biology (IMB), the mystery was finally solved. Using atomic force microscopy, the scientists were able to observe how the ring structures disassemble and form carpets on membrane surfaces. “For the very first time we were able to visualize the neat IM30 structure on the surface of membranes,” said Schneider.

IM30 belongs to the group of intrinsically disordered proteins, which have shifted into the focus of science in recent years. When IM30 binds to the membrane, it unfolds in half – which makes it particularly complicated to study. The traditional understanding of proteins has been based on the assumption that their function is associated with its structure and that disordered structures more or less take over no function. “It is now becoming increasingly clear that disordered protein regions can be involved in defined interactions”, stated Schneider as to the classification of the results in a large-scale context.

The study defines the thus far enigmatic structural basis for the physiological function of IM30 and related proteins, including the phage shock protein A (PspA), the main representative of the protein family to which IM30 belongs. It also “highlights a hitherto unrecognized concept of membrane stabilization by intrinsically disordered proteins,” stated the authors in the Communications Biology paper. In fact, self-organization of proteins on membrane surfaces, resulting in membrane-covering protein structures, has already been observed before, for example in Alzheimer’s or Parkinson’s disease. In these cases, however, the result is membrane destabilization. In contrast, the protective protein carpet formed by IM30 results in membrane stabilization.

“Our discovery now answers the long-standing question as to how exactly the protein protects the membrane. This, however, raises new questions, for example how the individual proteins exactly interact on the membrane surface and form the carpet,” said Schneider about the research now planned.

This interdisciplinary and collaborative research project was primarily undertaken by doctoral candidates of the Max Planck Graduate Center with Johannes Gutenberg University Mainz (MPGC). The MPGC was founded in 2009 to support joint projects and shared doctorates of Mainz University and the Max Planck Institutes for Polymer Research and for Chemistry, both located in Mainz.

Video:
https://download.uni-mainz.de/presse/video/09_biochemie_protein_im30.mp4
Rings consisting of many individual IM30 proteins bind to membrane surfaces. Upon membrane binding, the rings disintegrate and form a carpet on the membrane surface. In addition, the proteins unfold after the disintegration of the rings; about half of the protein is intrinsically disordered.
video/©: Dirk Schneider, Benedikt Junglas