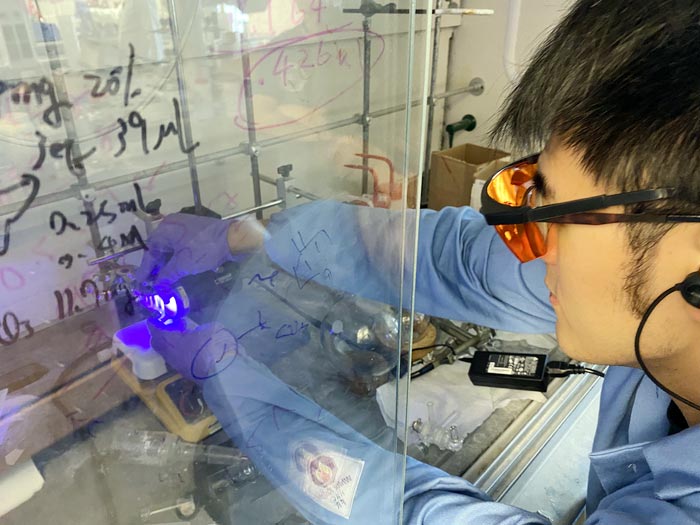 Rice University graduate student Kang-Jie (Harry) Bian sets up light-sensitive molecules for an experiment in the lab of chemist Julian West. Bian is lead author of a study inspired by natural processes to enable the modular difunctionalization of alkene molecules for drug and materials design.
Credit: Rice University

Inspired by your liver and activated by light, a chemical process developed in labs at Rice University and in China shows promise for drug design and the development of unique materials.

Researchers led by Rice chemist Julian West and Xi-Sheng Wang at the University of Science and Technology of China, Hefei, are reporting their successful catalytic process to simultaneously add two distinct functional groups to single alkenes, organic molecules drawn from petrochemicals that contain at least one carbon-carbon double bond combined with hydrogen atoms.

Better yet, they say, is that these alkenes are “unactivated” — that is, they lack reactive atoms near the double bond — and until now, have proven challenging to enhance.

The chemical pathway detailed in the Journal of the American Chemical Society could simplify the creation of a library of precursors for the pharmaceutical industry and enhance the manufacture of polymers.

“These enzymes are sort of buzzsaws that grind up molecules before they can get you into trouble,” he said. “They do this through an interesting mechanism called radical rebound.”

“That electron really wants to find a partner, so the P450 will immediately give back an oxygen atom (the ‘rebound’), oxidizing the molecule,” he said. “In the body, that helps deactivate these molecules so you can get rid of them.

“This kind of rebound is powerful,” West said. “And Harry (lead author Kang-Jie Bian, a Rice graduate student) wondered if could we do something like it to transfer different fragments onto that radical.”

Their solution was to enable what they call radical ligand transfer, a general method that uses manganese to catalyze the “radical rebound.”

West said while P450 uses the nearby element, iron, to catalyze the biological reaction, earlier experiments at the Rice lab and elsewhere showed manganese had potential.

“Manganese helped the process be more selective and a little bit more active, as well as much cheaper and easier,” he explained. “It can transfer a bunch of different atoms — like chlorine, nitrogen and sulfur — just by changing which commercial ingredient you add into the reaction.”

That reaction accounted for one functionalization. Why not go for two?

West said Bian also came up with the idea of adding a photocatalyst to the mix. “When you shine light on it, it becomes excited and you can do things that would be impossible in the ground state, like activate fluorocarbon small molecules to make radical fragments that have carbon-fluorine bonds, which are important for pharmaceutical and material science,” he said. “Now we can attach these to our molecule of interest.”

The end result is a mild and modular process to add two functional groups to a single alkene in one step.

“First we have the carbon-carbon double bond of a molecule of interest, the alkene,” West said, summing up. “Then we add this valuable fluorocarbon, and then the manganese catalyst swims up and does this radical ligand transfer to add a chlorine or nitrogen or sulfur atom.”

He noted the collaboration between Rice and Wang’s lab was a natural result of Bian’s move to Rice from Hefei, where he earned his master’s degree. “We really focused on the manganese aspect of this work, and Wang’s group brought not only expertise in photocatalysis but also developed and tested carbon-fluorine fragments, and showed they would work really well in this system,” West said.

He said that along with pharmaceutical and materials sciences, chemical biology could also benefit from the process, especially for its affinity to pClick, a method discovered by Rice chemist Han Xiao to attach drugs or other substances to antibodies.

Co-authors are Rice undergraduate David Nemoto Jr. and graduate student Shih-Chieh Kao, and Yan He and Yan Li of Hefei. Wang is a professor at Hefei. West is the Norman Hackerman-Welch Young Investigator and an assistant professor of chemistry.

This news release can be found online at https://news.rice.edu/news/2022/process-customize-molecules-does-double-duty.

Rice University graduate student Kang-Jie (Harry) Bian sets up light-sensitive molecules for an experiment in the lab of chemist Julian West. Bian is lead author of a study inspired by natural processes to enable the modular difunctionalization of alkene molecules for drug and materials design. (Credit: Rice University)

From left, graduate students Kang-Jie (Harry) Bian and Shih-Chieh Kao and undergraduate student David Nemoto Jr. are the lab team at Rice University that developed a method to add two functions to a single alkene molecule in a single process. The discovery could simplify drug and materials design. (Credit: Rice University)

Located on a 300-acre forested campus in Houston, Rice University is consistently ranked among the nation’s top 20 universities by U.S. News & World Report. Rice has highly respected schools of Architecture, Business, Continuing Studies, Engineering, Humanities, Music, Natural Sciences and Social Sciences and is home to the Baker Institute for Public Policy. With 4,240 undergraduates and 3,972 graduate students, Rice’s undergraduate student-to-faculty ratio is just under 6-to-1. Its residential college system builds close-knit communities and lifelong friendships, just one reason why Rice is ranked No. 1 for lots of race/class interaction and No. 1 for quality of life by the Princeton Review. Rice is also rated as a best value among private universities by Kiplinger’s Personal Finance.