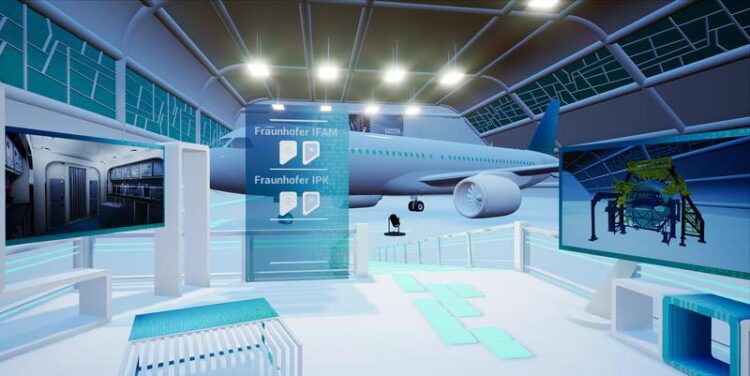 At the ILA 2022, explorable via VR glasses: The Clean Sky 2 fuselage of the future can be seen in the virtual aircraft hangar on the right, which is currently being set up at Fraunhofer IFAM in Stade on a 1:1 scale with project partners
© Fraunhofer

… through automation & robotics from Fraunhofer IFAM in Stade.

ILA 2022 l Hall 4 l Booth 350 – The Automation and Production Technology experts from the Fraunhofer Institute for Manufacturing Technology and Advanced Materials IFAM in Stade will be presenting automation solutions for sustainable aircraft construction at the Fraunhofer AVIATION & SPACE booth at the International Aerospace Exhibition in Berlin from June 22 to 26, 2022.

New, weight-saving materials and manufacturing processes not only increase efficiency and reduce costs, but in particular represent milestones on the way to climate-friendly flying: in a typical passenger aircraft, each kilogram saved reduces kerosene consumption by up to 120 kg per year. The scientists provide insights into current application-oriented research and development work, which they are carrying out on a 1:1 scale at the Research Center CFK NORD in Stade, Germany.

In a virtual aircraft hangar, visitors to ILA 2022 will have the opportunity to individually explore the Clean Sky 2 “Multifunctional Fuselage Demonstrator” (“MFFD”) using VR glasses, which is currently being built on a 1:1 scale at Fraunhofer IFAM in Stade (Figures 1 and 2). The significant weight reduction of the aircraft fuselage of the future results from a new design, which in turn is made accessible for this area of application by the use of thermoplastic fiber composites for the first time worldwide.

Increasing demand for aircraft and the need to reduce CO2 emissions require new methods and technologies in the aircraft construction. For a significant increase in productivity on the one hand and environmental compatibility – through weight reduction – on the other, there is a promising approach: the combination of thermoplastic, carbon fiber-reinforced plastic (CFRP) aircraft structural elements, fairing parts and cabin system elements into an integrated structural module.

The Clean Sky 2 “Multifunctional Fuselage Demonstrator” (“MFFD”) is investigating the technological and economic feasibility of welding-based assembly of highly integrated, thermoplastic aircraft fuselage structures. This includes the construction of a 1:1 scale demonstrator with various joint designs and welding processes in Stade, which is being developed together with international project partners. In addition to the welding process, the focus is on automated manipulation and assembly of the structures while maintaining the highest tolerance requirements.

Furthermore, newly developed, weight-reducing thermoplastic CFRP integral frames, which stiffen the aircraft fuselage in the transverse direction, and thermoplastic gap fillers (shim) will be the focus of the “OSFIT” (“One Shot Fully Integrated Thermoplastic Frame”) exhibit at the ILA 2022, together with the associated video. In the future, automated, intelligent and precise pre-assembly processes will replace the previous time-consuming manual steps in the assembly of these thermoplastic integral frames to the aircraft fuselage, thus not only increasing production rates but also reducing costs.

Integral frames from carbon fiber-reinforced plastics (CFRP) based on thermoplastics are an important step for aircraft construction in the direction of a circular economy, as these plastics, which can be deformed again by heating after curing, are easier to repair or recycle. The experts at Fraunhofer IFAM in Stade used this property of thermoplastics in the OSFIT sub-project “Robot-supported adapted in-line shim processes using 3D printing” to develop processes for the automated pre-assembly of such an integral frame. For this purpose, together with project partners, they realized both a virtual gap measurement and a robot-guided automated 3D printing application of gap fillers as joining technology (Figure 3).

By using agile production technologies for CFRP box structures, researchers at Fraunhofer IFAM in Stade optimized the production processes of aircraft vertical stabilizers. A video shows visitors at ILA 2022 the results of the joint project “Fast-Flexmont2”.

With the aim of no longer interrupting the assembly of rudder forks to the VTP box by long waiting times, Fraunhofer IFAM experts and partners have developed application and curing of shim material (gap-filling material; Figure 4) as a parallel process. Automated and digitally networked processes enable volume-accurate metering and application as well as precise shaping and edge smoothing of the shim. Only after the gap filling has cured, the completely shimmed rudder fork is inserted into the vertical stabilizer.

Thus, in addition to agile manufacturing, the parallelization of work steps makes it possible to reuse technical resources and consequently increase productivity while at the same time reducing costs.

A video will present visitors attending to ILA 2022 with a further milestone with regard to agile production technologies – the new mobile holding fixture developed by Fraunhofer IFAM in Stade together with project partners can flexibly hold various large components, such as aircraft tail planes or landing flaps, in different types up to eight meters in length, align them precisely and sustainably, and transport them (Figure 5).

This joint research project (“UniFix”; “Universal mobile component clamping and fixing device for the processing of fiber composite structures”) is also all about weight-reducing large CFRP structures on a 1:1 scale for aircraft construction: Focused on machining processes in the production flow, this holding fixture is able to significantly relieve a machining line of time-consuming, non-value-adding secondary activities by passing through various process stations in advance with the optimally and precisely aligned large components, at which preparatory work can be carried out in parallel and simultaneously.

This flow-oriented production makes it possible to reduce throughput times and thus increase productivity, efficiency and cost-effectiveness, and consequently competitiveness in the international market. The advantages of flow-oriented manufacturing lie primarily in the reduction of manual handling operations and non-productive time. In addition, there are increases in efficiency through specialization of the individual plants, reduced throughput times due to harmonized cycle times, as well as an associated reduction in buffer stocks and faster reaction to process deviations.