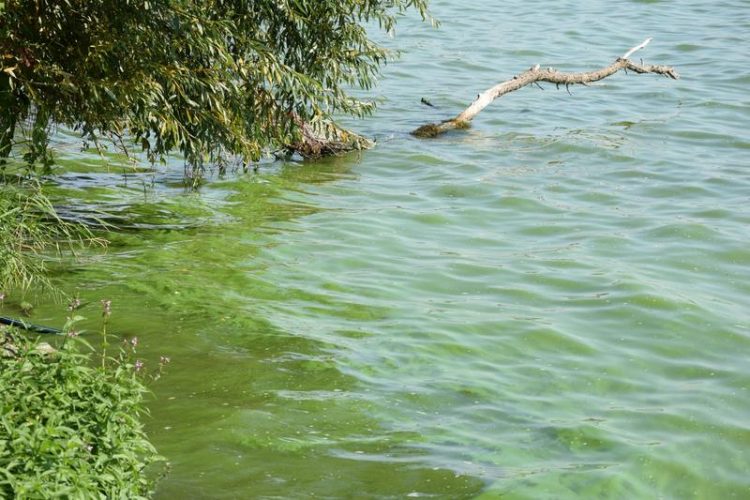 These mass developments affect water quality because many cyanobacteria produce toxins and reduce the oxygen concentration in the water, sometimes leading to death of fish and other aquatic organisms.

The international team led by IGB found that algal growth can be controlled by parasitic fungi. “Many of these algae have long filamentous shapes or grow in colonies, which makes them difficult to be eaten by their natural predators”, explains Dr. Thijs Frenken, first author of the study and researcher at IGB and the University of Windsor in Canada.

Chytrids, a very common group of fungi, often infect cyanobacteria. The researchers have now shown that, in addition to infecting and killing algae, the fungi “chop” the algae into shorter pieces, making them easier to be eaten by small aquatic organisms.

“We knew that fungal infections reduce the growth of cyanobacteria, but now we know that they also make them easier prey”, says IGB researcher Dr. Ramsy Agha, head of the study.

Fungi as food supplements for zooplankton:

The researchers showed that in addition to “chopping” infected cyanobacteria filaments and making them more vulnerable to predation by small organisms in the water, zooplankton, parasitic fungi themselves serve as a valuable food supplement.

Chytrid fungi contain various fats and oils that are an important part of the diet of small freshwater organisms and are not present in blue-green algae. Parasitic fungi therefore serve as an important dietary connection between different levels of aquatic food webs.

“These results show how parasites, although usually perceived as something bad, also have important positive effects on the functioning of aquatic ecosystems”, says Professor Justyna Wolinska, head of the IGB research group Disease Evolutionary Ecology.

It combines basic and preventive research, trains young scientists and advises decision-makers and society for a sustainable freshwater management. Its key research activities include the long-term development of lakes, rivers and wetlands and the effects of climate change, the renaturation of ecosystems, the conservation of aquatic biodiversity, and technologies for sustainable aquaculture.

Work is conducted in close cooperation with universities and research institutions from the Berlin-Brandenburg region as well as worldwide. IGB is a member of the Forschungsverbund Berlin e. V., an association of eight research institutes of natural sciences, life sciences and environmental sciences in Berlin. The institutes are members of the Leibniz Association. https://www.igb-berlin.de/en