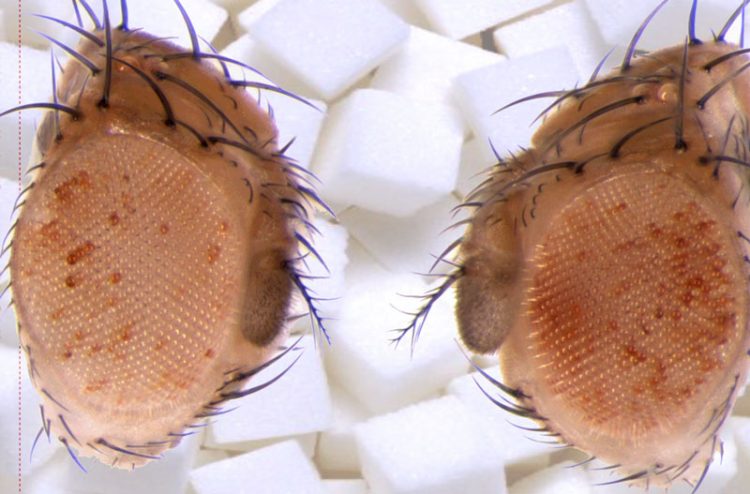 Researchers can identify the obese flies by their red eyes: Due to the particularly sugary diet of their fathers, the genes for a red dye in the eye as well as other metabolism factors can be identified in the sons. © MPI f. Immunobiology and Epigenetics/ A. Pospisilik

The consumption of a sugary banquet before sex can have far-reaching consequences for a fruit fly and its offspring: it makes the young flies more prone to obesity. Together with researchers from Spain and Sweden, scientists from the Max Planck Institute of Immunobiology and Epigenetics in Freiburg have discovered that even a brief change in the diet of male fruit flies triggers obesity in the next generation.

Specifically, high-sugar nutrition consumed one to two days before mating causes the male offspring to accumulate more body fat – but only if the young insects have a particularly high-sugar diet. Importantly, the international research team identified the first gene networks for generating such intergenerational responses.

The food consumed by the father activates genes that can cause epigenetic changes in the genome. These changes are inherited and alter metabolic gene control in the next generation. Moreover, the researchers discovered a similar gene network in humans and mice which also predicts their susceptibility to obesity.

Our DNA is a determining factor in our weight – obesity is largely due to our genes. That said, environmental inputs, particularly in parents or during early development, can also affect body weight through epigenetic changes. These modifications can be inherited, although they do not change the genetic code.

The Max Planck scientists in Freiburg have now discovered that the diet of male fruit flies can influence the body weight of their offspring in this way. The researchers fed the adult male flies with food of varying sugar content two days before mating. The flies that hatched from the eggs were then given normal or high-sugar food. For technical reasons, the researchers only carried out the tests on male flies; comparable results, however, would probably have been obtained using female flies.

The fathers’ diet had no impact on sons that only consumed a balanced diet. However, the weight pattern was very different if the young flies had eaten particularly sugary food: the young animals whose fathers had consumed very low or high sugar food tended to be overweight; in other words the offspring were obesity susceptible. They had a higher proportion of body fat and also ate more than the sons of fathers that consumed a balanced diet. “So there is a U-shaped effect here: extreme sugar values in the father’s diet – be they high or low – have the greatest consequences for the next generation,” explains Anita Öst from the Max Planck Institute of Immunobiology and Epigenetics, who now researches at Linköping University in Sweden. The effect on body weight is not transmitted any further, however, as the scientists did not observe it in the grandchildren’s generation.

It appears that the inheritance of the father’s nutritional status is dependent on the methylation pattern in the proteins that package DNA. Methyl appendages, which are small chemical groups, control how compactly DNA is packaged. The level of gene expression depends on this. Genetically modified flies, in which different methylation enzymes are partly blocked, do not pass on their nutritional status to their sons. “We tested different fly mutants and identified seven genes which control the packaging of the DNA,” reports Adelheid Lempradl from the Freiburg-based Max Planck Institute. In the case of fathers with a high-sugar diet, the packaging of the DNA in the sons is loosened so that more metabolism genes can be expressed. This effect endures throughout the life of the fly.

It appears that a similar mechanism may also exist in humans. The researchers evaluated the data from tests on Pima Indians – a group of North American indigenous people who frequently suffer from obesity – and monozygotic twins. The two studies from 2005 and 2008 compare normal weight and obese individuals and their genes. “The data show that obese people have the same gene signature as the fruit flies. Thus, susceptibility to a high body weight in humans is also predicted by certain methyltransferases being less active,” explains J. Andrew Pospisilik, Group Leader at the Max Planck Institute of Immunobiology and Epigenetics. According to the researchers, the same genes also regulate weight in mice.