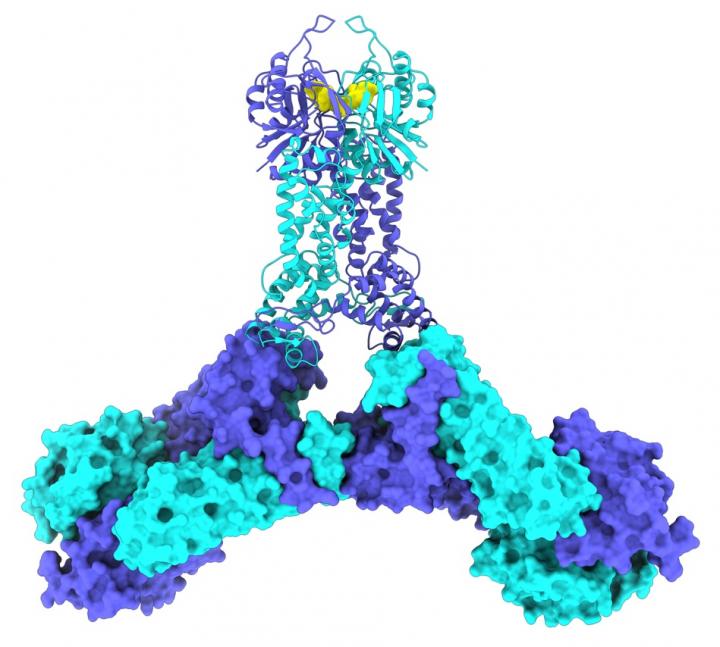 With the aid of highly advanced microscopes and synchrotron sources, researchers from the University of Copenhagen have gained seminal insight into how bacteria function as defence mechanisms against attacks from other bacteria and viruses.

The study, which has just been published in the renowned journal, Nature Communications, also describes how the defence systems can be activated on cue. This discovery can turn out to be an important cornerstone in fighting diseases in the future.

The researchers have shown how a cell attacked by a virus activates a molecule called COA (Cyclic Oligoadenylate), which in turn activates a so-called protein complex called CSX1 to eradicate the attacker.

'Expressed in popular terms, the CSX1 starts cutting up the intruder. We can see how CSX1 is activated, rotates and starts defending the cell, once COA is activated,' Professor Guillermo Montoya from Novo Nordisk Foundation Center for Protein Research at the Faculty of Health and Medical Science explains.

The researchers at the University of Copenhagen have also managed to successfully activate the process themselves. They sent a COA molecule after the protein complex, so to say, and thus started the defence mechanism.

'In short, we have found a switch that turns on the cell's defence system when we want it to, and so we can diffuse possible attacks,' Guillermo Montoya elaborates.

It is the first time ever that researchers have managed to map and activate a bacterial immune system.

'A few years ago, science wasn't even aware that bacteria had some sort of immune defence system. With this discovery, we have come a great deal further in terms of understanding these mechanisms,' Guillermo Montoya says.

Furthermore, the discovery is interesting because the defence system in bacteria resemble in many ways the human innate immune system.

'Therefore, it is also a step along the way of understanding the human immune system better as well as knowing how to fight bacteria and defend oneself against viruses and in the long run even multiple resistance,' Guillermo Montoya says.

The discovery of a bacteria defence system was made possible by using so-called x-ray crystallography at an establishment in Switzerland and one of the world's most powerful microscopes – the so-called synchrotron MAX IV – in Lund, Sweden.

The image of the CSX1protein complex was made possible by the advanced cryogenic electron microscope at the University of Copenhagen's high tech CryoEM facility – in popular terms a strong magnifying glass.

'CSX1 is approximately 0.00005 mm long. This equates cutting one millimetre into 10,000 slices and then placing five pieces on top of each other. We have taken the pictures one by one and made a short film that reveals the activity inside CSX1,' Guillermo Montoya explains.

The work with uncovering defence mechanisms in bacteria is supported by Novo Nordisk Fonden and it is a collaboration between Novo Nordisk Center for Protein Research at the Faculty of Health and Medical Science and the Danish Archea Center at the Faculty of Science headed by Professor Qunxin She and Lund University.