The best of both worlds: a designer molecule to combat type 2 diabetes 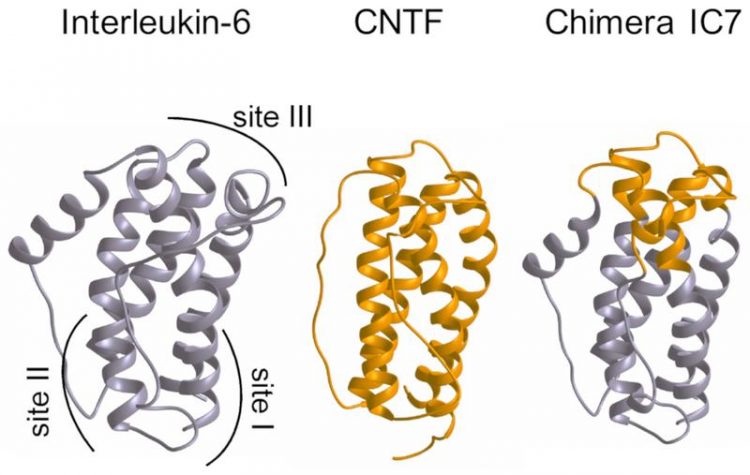 The artificial molecule IC7 (and also the ensuing molecule IC7Fc) largely consists of blocks of Interleukin-6 (IL-6, gray) and a section from a block of CNTF (gold). Rose-John, Uni Kiel

Scientists led by Professor Stefan Rose-John, a biochemist at Kiel University (CAU) and member of the Cluster of Excellence “Precision Medicine in Chronic Inflammation”, have developed and produced a molecule which improves insulin sensitivity in type 2 diabetes in laboratory experiments.

The molecule is made up of parts of two naturally occurring signaling molecules, IL-6 and CNTF. Through the new composition, the synthetic protein combines the positive properties of both original proteins, but without their unwanted side-effects. In the future, it could be used as a new type of medication for treating type 2 diabetes.

The team led by Rose-John, together with scientists from Melbourne in Australia, published their results on Wednesday in the scientific journal Nature.

An estimated 370 million people worldwide suffer from type 2 diabetes, but according to predictions, this number could even double by 2030. The main risk factors for type 2 diabetes are obesity and lack of exercise. With type 2 diabetes, the body cells respond progressively worse to the hormone insulin, i.e. they become more and more insulin resistant.

As a result, muscle and fat cells can no longer take up glucose (i.e. sugar), since this process is controlled by insulin. In addition, since it no longer responds to insulin, the liver starts uninhibitedly producing glucose and releasing it into the blood. Thus, the entire blood sugar balance breaks down, and the blood sugar level rises more and more.

Previous studies have shown that the signaling molecule IL-6 has a positive effect on the metabolic reaction disturbed by type 2 diabetes: in both mice and in humans, it was able to reduce obesity as well as insulin resistance. As such, this could actually be a good active ingredient against type 2 diabetes.

However, the signaling molecule acts on the body in many different ways – among other things, it is also pro-inflammatory, and therefore cannot be considered as a medication for the treatment of type 2 diabetes.

In studies, the molecule CNTF has also improved insulin sensitivity and reduced obesity. However, clinical studies have also shown that two-thirds of patients form antibodies against CNTF, rendering the molecule ineffective. Their immune system identifies the molecule as a foreign substance, and tries to fight it. Therefore, both CNTF as well as IL-6 are unsuitable as medication for type 2 diabetes.

The solution: a combination of the two

“In our laboratory, we already designed a molecule some time ago, which consists mainly of components of IL-6, and in which a part has been replaced by a section of CNTF,” reported Rose-John, from the Institute of Biochemistry at the CAU. “In exchange with my Australian colleague Mark Febbraio from Monash University in Melbourne, we came up with the idea that this constructed molecule could function similarly to CNTF and IL-6 for type 2 diabetes, but without the well-known unwanted side-effects.”

The researchers led by Rose-John originally produced the molecule to find out more about the structure and functioning of the so-called receptor complexes of IL-6 and CNTF. These are two-part structures in body cells, to which specific signaling molecules from outside the cell bind themselves – in this case IL-6 or CNTF – thereby merging both parts and triggering a specific reaction in the respective cell.

Rose-John and Febbraio therefore decided to test this molecule in more detail. In Rose-John’s lab in Kiel, they first adapted it so that it is better suited for use in the experiments. The Australian researchers then tested its metabolic effect in detail in the laboratory, and in experiments on animals.

And in fact, the molecule named IC7Fc delivered on its promise: it lowered the sugar content in the blood of obese mice, and restored insulin sensitivity. In addition, mice that were treated with the molecule lost weight. At the same time, IC7Fc caused no unwanted immune system or inflammatory reactions.

The researchers have also demonstrated this in human cells. IC7Fc is thus apparently much more tolerable than pure CNTF. “I am delighted with how well it works. Next, we want to test our molecule in clinical trials. If our observations are confirmed, IC7Fc could become a new drug for treating type 2 diabetes,” said Rose-John.

https://precisionmedicine.de/pm/material/20190925_Designermolekül.jpg
The artificial molecule IC7 (and also the ensuing molecule IC7Fc) largely consists of blocks of Interleukin-6 (IL-6, gray) and a section from a block of CNTF (gold).
Copyright: Rose-John, Uni Kiel.

https://precisionmedicine.de/pm/material/20190925_Rose-John.jpg
Professor Stefan Rose-John, member of the Cluster of Excellence “Precision Medicine in Chronic Inflammation”, Executive Director of the Institute of Biochemistry at Kiel University (CAU), and head of the Collaborative Research Centre (CRC) 877 “Proteolysis as a Regulatory Event in Pathophysiology”.
Photo/Copyright: T. Böschen / Cluster of Excellence PMI, Uni Kiel.

The Cluster of Excellence “Precision Medicine in Chronic Inflammation” (PMI) is being funded from 2019 to 2025 through the German Excellence Strategy (ExStra). It succeeds the “Inflammation at Interfaces” Cluster, which was already funded in two periods of the Excellence Initiative (2007-2018). Around 300 members from eight institutions at four locations are involved: Kiel (Kiel University, University Medical Center Schleswig-Holstein (UKSH), Muthesius University of Fine Arts and Design, Kiel Institute for the World Economy (IfW), Leibniz Institute for Science and Mathematics Education (IPN)), Lübeck (University of Lübeck, University Medical Center Schleswig-Holstein (UKSH)), Plön (Max Planck Institute for Evolutionary Biology) and Borstel (Research Center Borstel – Leibniz Lung Center).
The goal is to translate interdisciplinary research findings on chronic inflammatory diseases of barrier organs to healthcare more intensively, as well as to fulfill previously unsatisfied needs of the patients. Three points are important in the context of successful treatment, and are therefore at the heart of PMI research: the early detection of chronic inflammatory diseases, the prediction of disease progression and complications, and the prediction of individual responses to treatment.