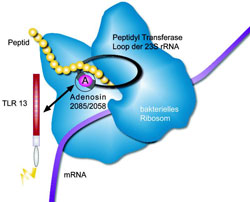 A bacterial 23S ribososmal (r) RNA segment activates the Toll-like receptor 13. This 23S rRNA segment is known to also bind antibiotics such as erythromycin (ery). Its central adenosine (A) 2085 in S. aureus and A2058 in E. coli 23S rRNA is mutated or methylated in ery resistant bacteria.<br>Design: Daniela Willemsen<br><br>

We are surrounded by bacteria, viruses, fungi and parasites. The fact that we nevertheless do not fall prey to infections is thanks to certain cellular sensor molecules such as toll-like receptors (TLR), which recognize the molecular structure of pathogens and intercede by ensuring an often completely unnoticeable elimination of the invaders.

Their immune-activating abilities were only detected in 1998, a discovery which was awarded with the Nobel Prize. Now, there are new findings published by an international Team of microbiologists in the research journal Science.

The international research team led by Prof. Dr. Carsten Kirschning of the Institute of Medical Microbiology at the University hospital Essen and the University of Duisburg-Essen and PD Dr. Hubertus Hochrein is examining the complex recognition of bacteria.

Our innate immune system is clever. Certain structures, which are characteristic of many microorganisms are recognized via TLR which trigger the necessary inflammatory response. However, the situation can become dangerous: since this receptor system is so sensitive, the immune response to serious infections may be over-exaggerated and miss the mark. Blood poisoning and frequently septic shock is the result.

Thus, the experts decided to take a closer look at the host recognition of Staphylococcus and E.coli bacteria, often the main agents of blood poisoning. They established that in the cell, TLR13 recognises the segment of bacterial ribosomal ribonucleic acid to which specific antibiotics such as Erythromycin also bind should the segment not have been altered by mutation or other modifications. The concrete ribonucleic acid is referred as 23S rRNA. Animal and human ribosomes do not bind Erythromycin to their own 28S rRNA because its structure resembles that of the 23S rRNA of resistant bacteria.

The new findings are significant for the treatment of bacterial infections and gaining a greater understanding of antibiotic resistance. In addition, these findings may be of help in the therapy of immunological overreactions and lead to new vaccination strategies.