Home / Life Sciences / Helmholtz researchers get to grips with a herpesvirus
27.04.2018

Helmholtz researchers get to grips with a herpesvirus 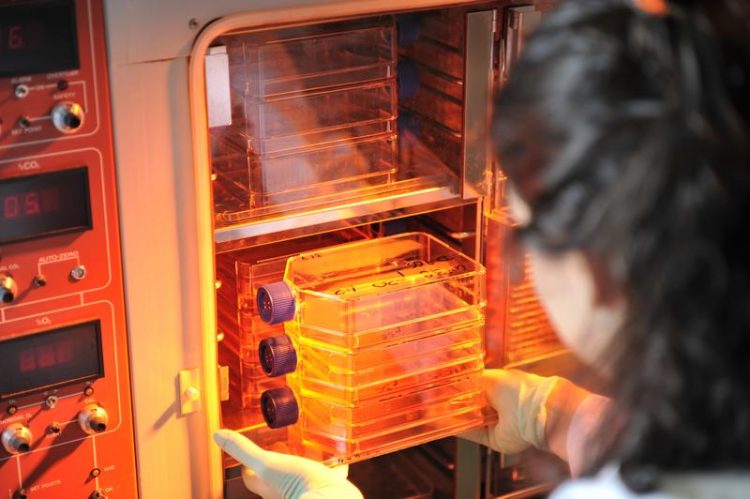 Scientists have identified components of HHV-6 that can be attacked by killer T cells. © Helmholtz Zentrum München

Most people acquire human herpesvirus 6, or HHV-6 for short, in early childhood. It is a distant relative of the herpes simplex virus known for causing blisters, but HHV-6 has entirely different effects: The infection can lead to a disease called three-day fever in infants and young children.

Later, the virus stays in the body and is never eliminated. Although HHV-6 does not affect the health of most people, it is suspected to contribute to autoimmune diseases and chronic fatigue syndrome. One thing is certain: patients with severely weakened immune systems, for example post-transplantation patients, have difficulty keeping the virus under control, which in some cases can result in serious damage to multiple organs.

To counter this risk, scientists at Helmholtz Zentrum München are investigating how the immune system keeps the virus in check. “We are studying the toolbox of the immune system,” says Dr. Andreas Moosmann, head of the HOCOVLAR* Research Group within the Research Unit Gene Vectors. “Now, we’ve discovered several interesting new tools that we’ve already been able to recreate in the lab.”

Specifically, the researchers set out to identify those components of the virus that could serve as targets for CD8-positive cells, also known as killer T cells. These cells are capable of destroying infected cells, thus preventing the virus from multiplying in the body.

Led by first author Larissa Martin and doctoral student Alexandra Hollaus, the researchers discovered 16 structures of the virus that HHV-6-specific killer cells can bind and attack. To this end, the scientists first scanned the pathogen with the help of an algorithm that identified nearly 300 potential attack sites**. Further analysis narrowed those candidates down to 77 sites. The scientists then succeeded in producing T cells directed against 20 of them, 16 of which actually latched onto their target and destroyed the infected cell.

“We were able to show that very dissimilar proteins of the virus can serve as such attack structures,” Andreas Moosmann explains. “We also observed that T cells directed against those structures commonly occur in healthy individuals as well as in transplant patients who control their infection.” – “Right now, we’re verifying this in a large group of patients,” adds Dr. Johanna Tischer, stem cell transplantation specialist at Klinikum Grosshadern***. In the long term, Andreas Moosmann and his team want to apply their findings to new treatments. “It might be possible to prevent a breakout of the virus by administering HHV-6-specific killer T cells to patients. But before that can be done, we still have a lot of work ahead of us.”

* HOCOVLAR stands for Host Control of Viral Latency and Reactivation. The group's researchers are focusing on T-cell responses to widespread human viruses such as Epstein-Barr virus, cytomegalovirus and, of course, HHV-6. The long-term goal is to develop T-cell-based strategies to prevent and cure diseases caused by those viruses. Further information can be found at http://www.helmholtz-muenchen.de/hocovlar

** These structures are peptides, i.e. fragments of proteins that make up a large part of the virus. The peptides are produced when viral proteins are broken down inside an infected cell. The peptides – still in the cell’s interior – then bind to human proteins called HLA molecules. The complexes consisting of viral peptides and HLA molecules are then transported to the cell surface, where they are presented. When T cells detect such a complex on the surface of a cell, they recognize that the cell is infected and initiate its destruction.

Background:
T cells mediate the body’s cellular immune response. As soon as antigens, i.e. foreign structures such as molecules from pathogens, are identified in the body, T cells begin to differentiate in order to carry out various defense functions. Cells known as CD8+ T cells, for example, are cytotoxic effector cells that kill infected or altered cells in the body. After infection has been vanquished, effector cells can turn into memory cells, which remain ready to quickly step into action as soon as infection emerges again.

The Research Unit Gene Vectors studies EBV's molecular functions to understand how the virus contributes to different types of disease. The scientists analyse the immune system of virus carriers to find out how EBV and other herpes viruses are kept in check, and why immune control has failed in patients with disease. They also investigate the origins of cancers of the immune system – lymphoma and leukaemia. Their ultimate goal is to develop new drugs, vaccines and cell-based therapies in order to efficiently treat or – preferentially – prevent infectious diseases and cancer. http://www.helmholtz-muenchen.de/en/agv

At the German Center for Infection Research (DZIF), over 500 scientists from 35 institutions nationwide jointly develop new approaches for the prevention, diagnosis and treatment of infectious diseases. Their aim is to translate research results into clinical practice rapidly and effectively. With this, the DZIF paves the way for developing new vaccines, diagnostics and drugs in the fight against infections. Further information at: http://www.dzif.de.