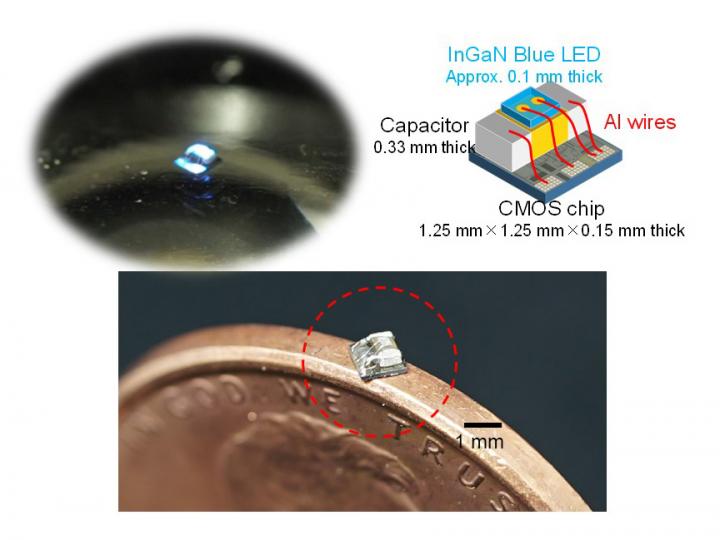 For centuries, it has been known that chemicals can change neural behavior. The field of optogenetics proved that neural behavior can also be changed with mere light. It is now known that light can activate certain proteins in the brain to change brain patterns.

Accordingly, scientists have implanted optical devices to successfully control the behavior of rodents using nothing more than light of specific wavelengths as the stimulus. However, the devices are often bulky, akin to wearing a football helmet or something heavier, and cause discomfort and distress to the animals.

Takashi Tokuda, an associate professor at the Nara Institute of Science and Technology (NAIST), has been investigating ways to miniaturize implantable optical devices.

“Size is always the challenge. No one likes having large implants,” he says.

The miniaturization of implantable devices has been hindered by a dependency on electromagnetics. In such devices, both the voltage and the current decrease with a reduction in size, thus limiting the power. On the other hand, in devices that depend on photovoltaics, voltage remains unchanged as size is reduced.

The device includes an InGan LED chip, which causes the device to emit blue light. A more distinguishing feature of the device, however, is that it can be activated with infrared light. Infrared is used in many light therapies, because it can penetrate deep in the body, whereas blue light cannot go much deeper than the surface. Therefore, the device can be implanted several centimeters into the body.

At just 1 mm3 and 2.3 mg, the volume and weight of the device are almost one order of magnitude than any other reported device, leading Tokuda to call it “the world's smallest wireless optical neural stimulator.”

At the same time, Tokuda acknowledges that the device needs modifications before reaching its fullest potential.

“The device can be applied only for pulse stimulations and requires a charge time for each stimulation. Most optogenetics use multiple pulses. We need to improve the power receiving and conversion efficiency,” he said.

Information about Prof. Ohta lab can be found at the following website: http://mswebs.naist.jp/LABs/pdslab/index-e.html