From Wound Healing to Regeneration 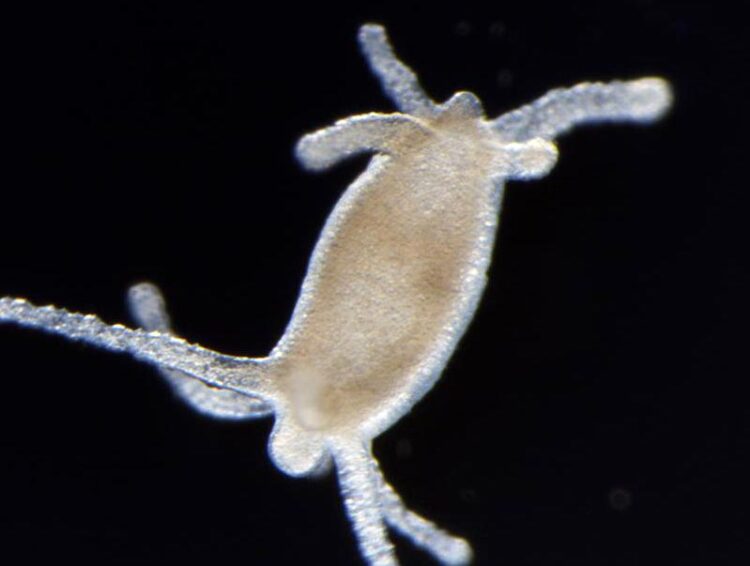 The picture shows a Hydra regenerate from which the head and foot were previously removed. Regeneration via recombinant Wnt led to the formation of a second head with tentacles instead of a regenerated foot.
Credit: Anja Tursch and Thomas W. Holstein (Heidelberg University)

Heidelberg scientists demonstrate how injuries are converted to regeneration signals at the molecular level.

The phenomenon of regeneration was discovered over 200 years ago in the freshwater polyp Hydra. Until now, however, it was largely unclear how the orderly regeneration of lost tissues or organs is activated after injury. In its investigations of Hydra, an interdisciplinary research team at Heidelberg University was able to show how wound healing signals released upon injury are converted into specific signals of pattern formation and cell differentiation. Essential components are the mitogen-activated protein kinases (MAPK) and the Wnt signalling pathway – molecular mechanisms that have remained relatively unchanged throughout evolution.

The ability to regenerate varies widely in animals. Most mammals and vertebrates have only limited regeneration capacity, while basal and simple animals that emerged early in evolution, like cnidarians and planarians, can regenerate their whole body. In all cases, the process of regeneration begins with wound healing. The cells at the site of injury proliferate and form an undifferentiated mass – a blastema – from which the missing structures are re-patterned. This activates genetic processes that also control embryonic development. To determine the molecular mechanisms involved, the research team led by Prof. Dr Thomas W. Holstein studied the freshwater polyp Hydra to understand the basic features of this activation of regeneration.

The core of their investigations is the doctoral thesis of Anja Tursch. She repeated the key experiment of Geneva naturalist Abraham Trembley (1710 to 1784) which led him to discover the regeneration phenomenon. The Hydra polyp is bisected, prompting the upper half to regenerate a new “head” and the lower half a new “foot” – hence totally different body parts can grow from the exact same tissue at the cut surface in the middle. Building on their previous work on Hydra regeneration, the researchers at the Centre for Organismal Studies (COS) of Heidelberg University have now shown how this is possible.

Regardless of where it occurs, any damage triggers nonspecific signals for an injury response, i.e. wound healing, via calcium ions and the production of reactive oxygen species. The signals are transmitted intracellularly by three mitogen-activated protein kinases – p38, JNKs, and ERK. Activation of these three molecules is required for both head and foot regeneration. Wnt signalling pathways are then activated that are important during embryonic development for the formation of rudimentary organs and the body axis. The generic signals of wound healing are thus transferred into position-specific signals of patterning and cell differentiation for regeneration.

“Our experiments show that the Wnt signalling pathway is a main component of the initially general injury response and, depending on signal strength, directs the tissue toward head or foot development,” explains Prof. Holstein. This is why, in the case of MAPK inhibition, the otherwise absent regeneration can be induced by artificially generated, recombinant Wnt proteins. “It was also surprising that in middle body parts that had both head and foot removed, heads can be induced at both ends in this way,” adds Dr Suat Özbek, a member of Prof. Holstein’s “Molecular Evolution and Genomics” research group at the COS.

Wnt/β-catenin, one piece of the Wnt signalling pathway, was already known to encode positional information for new head structure formation. In collaboration with mathematicians led by Prof. Dr Anna Marciniak-Czochra, the research team of Prof. Holstein and Dr Özbek developed a model that shows how basal positional information in the tissue transforms the initially undifferentiated injury response into a differential patterning process via the Wnt signalling pathway. “Because MAPKs and Wnts are highly evolutionarily conserved, this mechanism is likely deeply embedded in our genome, which is important for regenerative processes in vertebrates and mammals as well,” stresses Thomas Holstein.

The research was done under the auspices of the “Mechanisms and Functions of Wnt Signaling” Collaborative Research Centre (CRC 1324) funded by the German Research Foundation. The results were published in the “Proceedings of the National Academy of Sciences” (PNAS).

Caption:
The freshwater polyp Hydra is known for its ability to regenerate. After the head or foot is removed – or both the head and the foot – Hydra is able to regenerate the missing structures, reforming fully intact organisms. The Heidelberg scientists investigated the molecular interactions that lead from damage to regeneration of the absent structures. The picture shows a Hydra regenerate from which the head and foot were previously removed. Regeneration via recombinant Wnt led to the formation of a second head with tentacles instead of a regenerated foot.
Photo: Anja Tursch and Thomas W. Holstein (Heidelberg University)