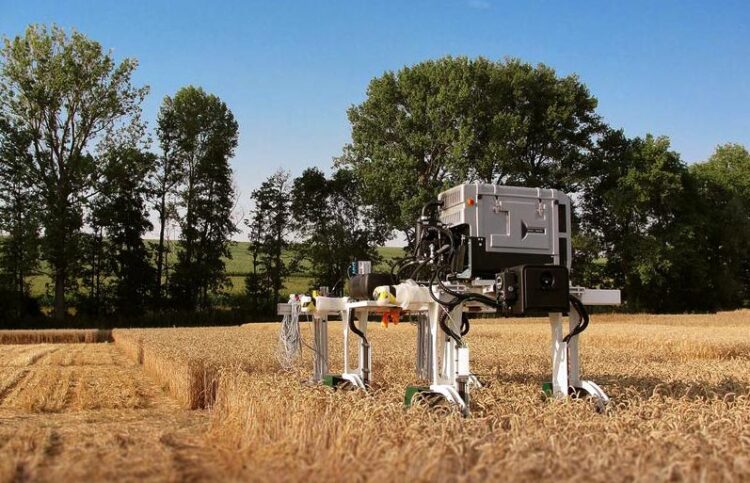 The field robot DeBiFix examines whole wheat fields to show how the kernels are developing inside the ears.
© Fraunhofer IIS

Climate change is causing major challenges especially for plant breeders. An intelligent field robot and X-ray technology are helping them selecting heat-tolerant plant varieties. The sensors in the high-tech machine were developed by the Fraunhofer Development Center for X-ray Technology, a division of the Fraunhofer Institute for Integrated Circuits IIS.

Our summers keep becoming hotter. Just this summer, Germany experienced a heatwave with temperatures of up to 40 C. The resulting drought also affected plants. Given an ample supply of water, these plants can cool themselves via evaporation. However, they cannot do this when under drought stress. This is why plant breeders hope to develop heat-tolerant, drought-resistant plants that can survive with less water – and yet still produce a good yield while requiring the smallest possible amount of fertilizer and pesticides.

The breeders have been receiving support from researchers at Fraunhofer EZRT, where for many years research has been carried out into technologies for determining plant phenotypes. This refers to their external appearance, which includes a multitude of factors such as leaf size, leaf arrangement, root thickness and yield. “People have been selecting crops based on external characteristics for thousands of years,” explains Dr. Stefan Gerth, Head of Department AMS of the Fraunhofer Development Center for X-ray Technology. “We’re developing technologies to objectively measure these phenotype characteristics and optimize breeding based on this data.”

For example, the research team led by Dr. Gerth has developed DeBiFix, a field robot for agricultural applications. As DeBiFix makes its way through densely packed ears of wheat it continuously takes X-ray images of the plants. At the same time, it generates 3D images using an optical system. This is important information for the breeder who owns the field that the robot is working in – it allows them to essentially look inside the ears of wheat and determine whether the variety they are cultivating will produce a good yield.
Biogenic value creation and smart farming project

The most important objective of the trans-regional Fraunhofer smart farming project is to support breeders. The Fraunhofer Center for Plant Phenotyping Technologies is being launched in Triesdorf, Bavaria as part of this project. At this location, Dr. Gerth and his colleagues intend to develop their expertise and translate it into real-life application. Triesdorf, Germany’s smallest town with a university, is home to agricultural teaching institutes and the Weihenstephan-Triesdorf University of Applied Science, making it a trans-regional center for agriculture. Fraunhofer IIS works closely with the Competence Center for Digital Agriculture located there.

In the lab cubicle for phenotyping plants in climate-controlled environments at Fraunhofer EZRT in Fürth, Dr. Gerth demonstrates how breeders will work in the future. On the narrow conveyor belt in front of the X-ray machine, pots of various crop plants are arranged in neat rows. The door of the X-ray machine opens, and a pot rolls inside. Once the door has closed, the pot undergoes a computed tomography scan, among other tests. Just five minutes later, it’s time for the next pot. “Over ten years ago, we started X-raying potato plants to get information about the tubers’ growth,” reports Dr. Gerth. “Based on the 3D X-ray scans, we can determine the weight of the tubers without having to dig them up.” This process is being used for tasks such as selecting particularly heat-tolerant varieties. To this end, the plants are placed under heat stress inside the lab cubicle. The scans then show which plants deal with the stress most effectively, forming strong tubers in spite of the heat.

Whereas only thick roots and tubers could be X-rayed with the first computer tomography scans, the new systems can also capture the delicate underground root structure of wheat. “Our new X-ray machine is the most modern, powerful system for X-raying parts of plants underground,” says Dr. Gerth.

Researchers at Fraunhofer EZRT are also conducting 3D digital imaging of the parts of the plants that are above ground, such as leaves and ears of wheat. This data can be used to determine more than just the area of the leaf surface – the 3D images also provide information on the plant’s heat tolerance. Does the plant raise its leaves to protect itself from the sun? Does it curl up its leaves due to stress?

The efficiency of Fraunhofer EZRT’s optical plant recognition systems was clearly demonstrated in a test field at the seed company Strube D&S GmbH. In this case, the second BlueBob prototype was used – a field robot that navigates by itself and automatically removes weeds in sugar beet fields. As it moves between the rows, it records images of all living plants using multispectral cameras. “By using artificial intelligence, the phenotype of each individual plant is analyzed and classified as either a weed or a beet plant,” explains Christian Hügel, Head of the Technical Center of Seed Research at Strube. If BlueBob 2.0 identifies a weed, it removes it from the ground with its hoeing tools. It removes weeds both between the rows (using static tools) and within the rows (using moving tools). As a result, almost all of the weeds around the beet plants are removed. This means the use of chemical weed killers can be drastically reduced.

One major work package at the new center in Triesdorf will involve processing the data obtained during phenotyping. “Our main goal is to use our technology to support small and medium-sized plant breeders,” emphasizes Dr. Gerth.