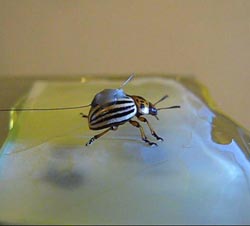 Beetles, cockroaches, and ants will have a harder time walking on facades or air conditioners in the future – thanks to the bio-inspired, anti-adhesive surfaces Prof. Dr. Thomas Speck, Dr. Bettina Prüm, and Dr. Holger Bohn are developing together with the Plant Biomechanics Group of the University of Freiburg.

The team studied plant surfaces in order to determine what influence cell form and microstructure as well as surface chemistry exert on the adhesion behavior of insects.

The researchers conducted adhesion experiments in which Colorado potato beetles walked across differently structured plant surfaces as well as replicas made of synthetic resins. The team used a highly sensitive sensor to measure the traction forces of the beetles on various surfaces. They discovered that wavy or strongly curved cells can increase the adhesive powers of beetles, whereas microstructures composed of wax crystals or cuticular folds reduce them.

The latter are tiny folds in the cuticle, a protective layer on the surface of the leaf resembling polyester. The beetles had the hardest time walking on surfaces with cuticular folds with a height and width of approximately 0.5 micrometers and a spacing of between 0.5 and 1.5 micrometers. “That is the perfect anti-adhesion surface. The insects slip off of it much easier than off glass,” says project director Thomas Speck.

The cuticular folds reduce the contact area between the adhesive hairs on the beetles’ legs and the plant surface. Unlike on more coarsely structured surfaces, the beetle can’t dig its feet firmly into the cuticular folds. Thus, the microstructure of the surface has a stronger effect on the adhesion of the beetle than the cell form.

Speck and his team published their findings in the current issue of the journal Acta Biomaterialia. In the future, the anti-adhesion surfaces could be used to line the ventilation pipes of air conditioners, which are often teeming with cockroaches and other insects. In addition, they could also be applied to facades and window frames to prevent insects that move predominantly by walking from entering the house and invading the cupboard and medicine cabinet. “This aspect is particularly important in the tropics,” says Speck.

The fundamental biological research on anti-adhesion surfaces will be conducted from now on at the Freiburg Center for Interactive Materials and Bioinspired Technologies (FIT), where the researchers will also press ahead with the material development and begin constructing a prototype. “We also want to collaborate with our colleagues at FIT to make the artificial surfaces adaptable to the hair structure of different groups of insects, for instance by means of stretching or shrinking,” explains the project director.