How the gut got its villi 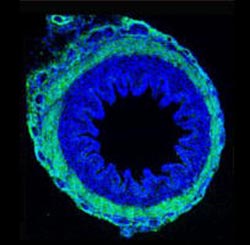 Villi, fingerlike structures on the inside wall of the gut, are crucial in the uptake of nutrients from food by effectively increasing the absorptive surface area. (Image courtesy of L. Mahadevan and Science/AAAS.)<br>

“You are not just a ball of cells,” says Clifford Tabin, George Jacob and Jacqueline Hazel Leder Professor of Genetics at Harvard Medical School (HMS).

The way cells organize within the human body allows us all to function the way we do, but a couple of Harvard professors are concerned as much with that developmental process as with the end result. Tabin shares a common perspective with L. Mahadevan, the Lola England de Valpine Professor of Applied Mathematics at the Harvard School of Engineering and Applied Sciences (SEAS), professor of organismic and evolutionary biology, and professor of physics.

“When I teach medical students, they’re more interested in the rare people who are born with birth defects,” says Tabin. “They want to understand embryology so they understand how things go awry, but I’m more interested in the fact that for everyone sitting in my classroom—all 200 of those medical students and dental students—it went right! And every one of them has a heart on the left side and every one of them has two kidneys, and how the heck do you do that?”

By taking steps back through embryos’ development, researchers in Mahadevan’s and Tabin’s laboratories investigated how the guts of several different animals end up as they do. Their findings, published in a recent issue of Science, reveal that the principles guiding the growth of intestinal structures called villi are surprisingly similar across chickens, frogs, mice, and snakes.

These fingerlike villi lie on the inside wall of the gut and are crucial in the uptake of nutrients from food by effectively increasing the absorptive surface area 30-fold.

Researchers in Tabin’s lab had noticed a zigzag pattern on the inside of the guts of chick embryos, while collaborating on a project that investigated the coiling of the gut.

“They showed me the picture and I said, ‘I know how to explain that,’” recalls Mahadevan, who had studied the cause of such zigzag patterns in shrinking gels in 2005.

Mahadevan’s group uses theoretical and experimental approaches to study a variety of problems in science and engineering, with a recent interest in the physical basis of morphogenesis in plants and animals, while Tabin’s team has a longstanding interest and expertise in the development of living organisms. Together, the groups designed and carried out experiments and simulations to elucidate exactly what makes the villi turn out the way they do, a process they dubbed “villification.”

Previous studies into villi development only looked at the later stages of their growth, which is driven by stem cells in the structures’ bases, but by pooling their expertise, the two labs postulated and confirmed that early villus growth is driven not by stem cell generation but by mechanical forces from the different muscle layers of the gut.

“It’s as if I had a piece of paper and wet it on one side: the wet region would swell, the dry one would not,” says Mahadevan. “This causes the paper to wrinkle. Similarly, when one layer of the gut grows relative to the other, it is compressed and buckles.”

Physical forces create wrinkling in the gut. (Image courtesy of L. Mahadevan and Science/AAAS.)The wrinkling of the inner gut, the researchers found, is intimately linked to the stages of muscle layer differentiation, which produce a series of different physical stresses. Co-lead authors Amy Shyer, a graduate student in Tabin’s lab, and Tuomas Tallinen, a postdoctoral fellow in Mahadevan’s lab, observed that muscle layer differentiation coincided exactly with shifts in the patterns observed in the gut, using computational models of the process that incorporated the gut’s experimentally measured geometry and mechanical properties.

By looking across animal models, the labs were even able to specify which muscle layers cause which folding patterns. Some animals, like frogs, keep their zigzag guts until birth because they lack a corresponding muscle layer found in chicks and mice, which allows individual villi to form.

“Now there is a gap,” says Tabin. The group's next aim is to explain interim growth, after the individual villi have been formed but before they are entirely dependent on stem cells for their preservation. More knowledge on this force-to-stem-cell transition will lead to broader understanding of other developmental mechanisms that cannot be observed in organisms after birth.

The implications of this work lie in the power of the physical approach to be generalized for organs in other species.

“There’s a very simple principle explaining these patterns: how leaves curl, how tendrils form, how the gut forms,” says Mahadevan. “They all arise because of differential growth, which leads to shape changes due to geometric incompatibility.”

“The people coming from the developmental biology world—the non-mathematical world—were not thinking in terms of physical forces,” says Tabin. “Then there was a second world of those who think mechanically, who think about how tubes fold in a biological setting.”

Alone, each perspective cannot, for example, fully paint the picture of villus formation, but studies like this help to build bridges across traditional disciplines.

The research was supported by the National Institutes of Health (R01 HD047360), a MacArthur Foundation “genius” grant to L. Mahadevan, and a grant from the Finnish National Science Foundation. In addition to his roles at Harvard SEAS and in the departments of physics and organismal and evolutionary biology, Mahadevan is a core faculty member at the Wyss Institute for Biologically Inspired Engineering at Harvard and a member of the Kavli Institute for Bionano Science at Technology, which is based at SEAS.