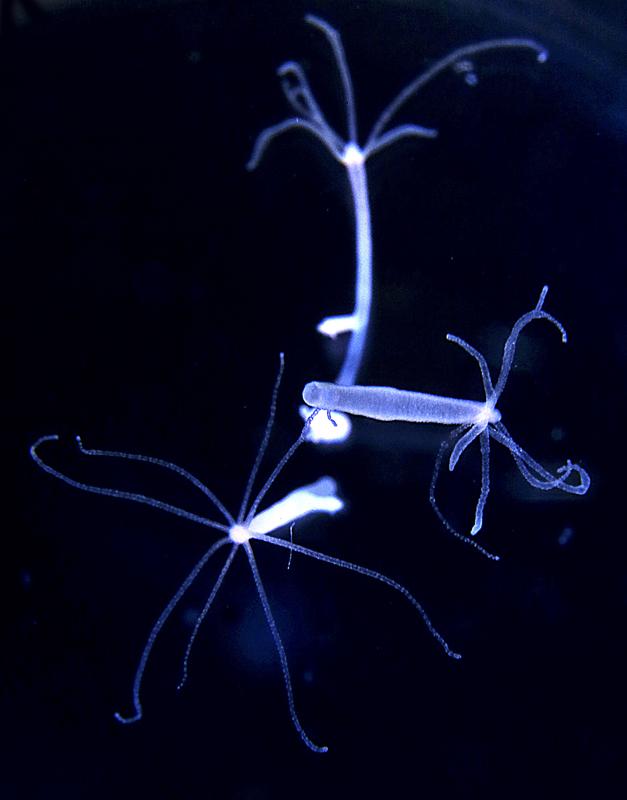 The common perception that the bodies of all living beings age, is wrong. This has now been proved by scientists of the Max Planck Institute for Demographic Research in Rostock by a long-term experiment with the freshwater polyp Hydra, a microscopic animal. Observing many hundreds of them for almost ten years, they calculated that Hydra’s mortality permanently stays constant and extremely low.

For most species, including humans, the probability of dying within a specific year rises with age. Scientists regard this as an indicator of the decay of the aging body. For Hydra, evolution seems to have found a way to escape the mechanisms of the physical deterioration of getting older. Researchers around MPIDR director James Vaupel and Daniel Martínez (Pomona College, Claremont, California, USA) have now published their findings in the science journal PNAS.

“Our findings are a fundamental challenge to common theories of the evolution of aging,” says MPIDR demographer Ralf Schaible. According to these theories, all multicellular species capable of repeated breeding inevitably decay physically when getting old.

Demographers have two ways of measuring this. On the one hand, fertility rates decrease markedly after a period of reproduction during early adulthood. On the other hand, after maturity the risk of dying increases considerably.

For humans the probability of dying within one year is reaching levels as high as 50 percent for advanced ages. For Hydra, however, it remains constant at a low 0.6 percent. Humans only experience such small values when they are between 20 and 30 years old. Additionally, Hydra’s reproduction rate did not diminish with age, instead the small animals continued to breed. In this sense the Rostock Hydra stayed forever young.

In the institute’s basement lab, the polyps outlive their researchers

In a unique long-term experiment MPIDR researchers created artificial conditions for the tiny water animals with their flimsy tentacles, which were free of fatal natural threats like predators. For almost ten years they have cared for about 1,800 of the Hydras in a laboratory in the basement of the institute in Rostock.

Each polyp lives in its own small glass dish exposed to a natural day-and-night cycle in special cabinets that are kept at a constant temperature of 18 degrees Celsius. Three times a week they are fed exactly the same amount of food.

Their care keeps a whole team of scientists and assistants busy. With razor-thin pipettes they place tiny shellfish right into the almost transparent tentacles of each individual polyp. Since the researchers started their experiment in March 2006 the Hydra spawned asexually by budding. All offspring are placed into their own glass dish and equally fed and pampered.

Self-repairing the body is Hydra’s secret of eternal youth

Overall, the team has counted 3.9 million observation days of individual Hydra. The number of natural deaths per year, however, can be counted on one hand. On average there have been only five. When a Hydra passed away it was mostly due to laboratory accidents, such as a polyp sticking to the lid of its bowl and then drying up or simply having been dropped on the floor. From of the few natural deaths that remained Jutta Gampe, Maciej Dańko and colleagues calculated Hydra’s mortality.

It is so low that even several lifetimes of researchers would not suffice to observe the end of the lifecycle of the polyps. Even after 500 years five percent of a cohort will still be alive. For two out of twelve of the Hydra cohorts under investigation, the risk of death was actually so small, that it will take 3,000 years until only five percent of the polyps remained.

“Hydra apparently manages to keep its body young because it does not senesce by accumulating damages and mutations, as most other living beings do,” says MPIDR biodemographer Alexander Scheuerlein. “Hydra are probably able to follow a special self-preservation strategy, as its body and cellular processes are rather simple,” says Scheuerlein.

For instance, Hydra are capable of completely replacing parts of the body that are damaged or are somehow lost. It can even fully regenerate if its body is destroyed almost completely thanks to a high number of stem cells. Stem cells are capable of developing into any part of the body at any time. Additionally, as Hydra replaces all of their cells within only four weeks, it regularly and quickly expels all cells that have been changed genetically by mutations. Thus, damages have little chance to accumulate.

The Max Planck Institute for Demographic Research in Rostock (MPIDR) investigates the structure and dynamics of populations. It focuses on issues of political relevance such as demographic change, aging, fertility, the redistribution of work over the course of life, as well as aspects of evolutionary biology and medicine. The MPIDR is one of the largest demographic research bodies in Europe and one of the worldwide leaders in the field. It is part of the Max Planck Society, the internationally renowned German research society.

This press release and pictures in high resolution can be found at www.demogr.mpg.de/go/hydra