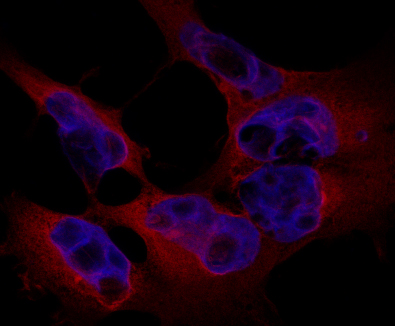 The German Research Foundation (DFG) will be providing approximately EUR 11 million over the next four years to fund a new collaborative research center on autophagy.

Scientists from the Mainz University Medical Center as well as from the Institute of Molecular Biology (IMB) are part of the research consortium. Autophagy is an important cellular process that is involved in energy production, cellular stress response, and immune reactions. The goal of the new research center is a better understanding of autophagy at the molecular and cellular level.

The researchers trust that they will be able to impact autophagy processes in the future in order to treat various forms of cancer, neurodegenerative disorders, infectious diseases, and inflammatory reactions more effectively. The center will be managed under the aegis of Goethe University Frankfurt.

Autophagy occurs in organisms as simple as yeast cells and as complex as human beings. It is through this process, for example, that protein aggregates are degraded that can cause severe damage in cells and can lead to cell death as it is observed in several neurodegenerative disorders.

Even entire cellular organelles can be removed by autophagy when they do not function properly any longer and viruses or bacteria that invade cells can be neutralized. The components recovered in the process can then be reused by cells as basic material, which is why autophagy is also employed as a strategy for cell survival when the energy supply is low. Autophagy represents an extremely complex and precisely regulated process that depends on the coordination of many players.

The degradation-prone substrate at first is specifically recognized and then enclosed by a membrane, which matures into a so-called autophagosome. This structure then fuses with larger cell organelles, the lysosomes that are filled with digestive enzymes and break the contents down to single building blocks.

“It has long been thought that autophagy represents an unspecific process. As it has become increasingly clear that the cells can target the process and that its disturbance is associated with an entire series of disorders, autophagy research has really taken off,” explained Professor Christian Behl, Deputy Speaker of the CRC and Director of the Institute of Pathobiochemistry at the Mainz University Medical Center. “Many questions are still awaiting answers. We need to determine, for example, how exactly this process is regulated and modulated and how it is linked to other cellular mechanisms.”

It is now known that autophagy is particularly dependent on the cellular context. By controlling various cellular components, it is able to prevent the formation of cancer cells. On the other hand, cancer cells make use of autophagy processes in order to survive the nutrient shortage associated with fast tumor growth.

Less research has been done on the interplay of autophagy with other mechanisms, such as the intake of substrates by the invagination of the cell membrane (endocytosis), programmed cell death (apoptosis), and the ubiquitin system, which marks proteins for degradation by the proteasome.

Within the new collaborative research center, scientists are planning to investigate autophagy at the molecular, cellular, and model organism level. It is the first large-scale collaborative project on this subject to be undertaken in Germany and enables the Frankfurt- and Mainz-based scientists to strengthen their position in a highly competitive international field.

For it, a broad setup across several disciplines is required and thus the network brings together structural biologists, biochemists, cellular biologists as well as clinicians. The results on molecular mechanisms will be directly assessed within model systems of human diseases.