Dissolving protein traffic jam at the entrance of mitochondria 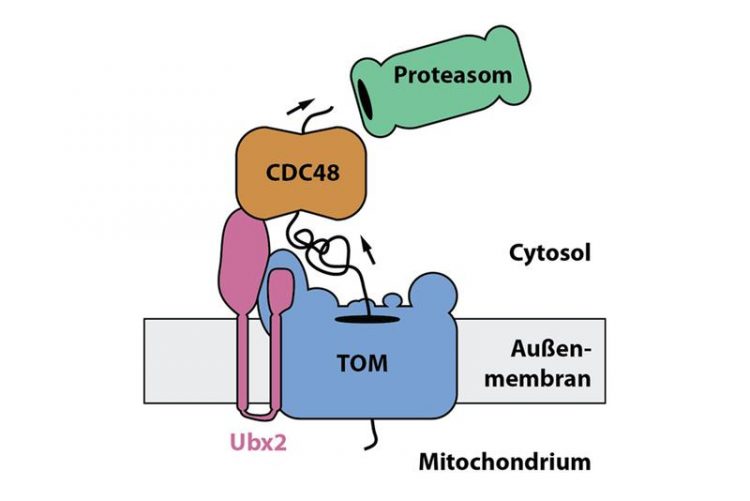 Together, the proteins Ubx2 and Cdc48 promote clearance of stalled precursor proteins from the general entry gate of mitochondria, the TOM complex, for proteasomal degradation. Illustration: Christoph Mårtensson

The research lab of the associate professor (Privatdozent) Dr. Thomas Becker at the University of Freiburg discovered a mechanism that solves blockades on the protein highway towards the powerhouse of the cell. The researchers published their findings in Nature.

Mitochondria produce the bulk of cellular energy and are therefore referred to as powerhouses of the cell. In order to fulfill their functions, mitochondria depend on the import of about 1.000 different proteins. These proteins are synthesized as precursors in the cytosol.

A small portion of the precursors proteins can be stalled in the translocation channel of the TOM complex and blocks the import of further proteins into mitochondria. Impaired protein translocation into mitochondria is deleterious for the cell and leads to a number of cellular stress responses. How the cell prevents an accumulation of such clogged TOM complex is unclear.

Researchers from the research training group 2202 “Transport Across and Into Membranes“, and the cluster of excellence CIBSS – Centre for Integrative Biological Signalling Studies at the University of Freiburg discovered a new mechanism that clears TOM complexes from stalled precursor proteins.

Christoph Mårtensson from the Becker lab showed in collaboration with the group of Prof. Dr. Bettina Warscheid an interaction of the protein Ubx2 with the TOM complex.

This finding was unexpected for the researchers since Ubx2 was previously found to function in the removal of misfolded proteins from the endoplasmic reticulum, another cell organelle. Becker´s team showed that Ubx2 is also present in mitochondria, where it binds to the TOM complex to recruit the cytosolic Cdc48. Cdc48 powers the extraction of stalled precursor protein from the TOM complex and transfers it to the cellular protein degradation machinery, the proteasome.

The researchers termed this pathway the “mitochondrial protein translocation-associated degradation”, mitoTAD. The mitoTAD mechanism allows efficient removal of clogged precursor proteins from the TOM complex and ensures unimpeded protein traffic into mitochondria. Since defects in protein transport into mitochondria has been linked to neurodegenerative disorders, the mitoTAD pathway could provide new insights into the molecular mechanisms that lead to the development of such diseases.

Figure legend:
Together, the proteins Ubx2 and Cdc48 promote clearance of stalled precursor proteins from the general entry gate of mitochondria, the TOM complex, for proteasomal degradation.
Illustration: Christoph Mårtensson